Last week, High-Def Digest was invited to attend the 2017 CE Week tradeshow in New York City. The annual mid-year event spotlights the latest tech and consumer electronics from some of the industry's top manufacturers -- and this year's show featured several exciting new products from companies like Focal, Samsung, Cleer, Merge VR, and more.

From Dolby Atmos speaker systems and high-end headphones to Ultra HD TVs and virtual reality gadgets, the show floor was packed with impressive demos, allowing me to go hands-on with some exciting new gear.

With that in mind, I've returned with a list of highlights and impressions from the event, rounding up the best tech products in attendance. And in addition to the picks below, be sure to check out our detailed rundown of the CE Week 2017 TV Shootout, which was also held during the show. Pitting six Ultra HD TVs in a head-to-head competition, the Shootout crowned LG's 65E7P OLED Ultra HD TV as the new "King of TV."

But while those fancy TVs did hog most of the spotlight, they were far from the only worthy products to see...

Note: All prices below reflect current Amazon or manufacturer listings before taxes or shipping fees.

For CE Week, Focal came out in full force, offering an enticing look at some of its new and upcoming products. The French audio brand brought several premium headphones to its booth, but the real show-stopper, and one of the best products at the event period, was the company's Sib Evo Dolby Atmos Speaker System. 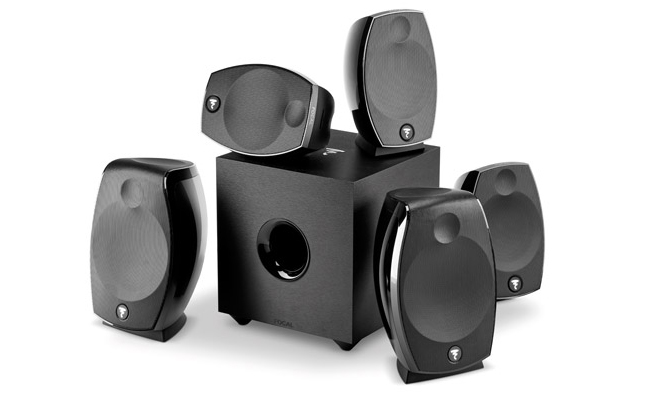 For demo purposes, Focal had the system set up in a private room mostly isolated from the noisy tradeshow environment. And though the room's high ceilings were a bit taller than the standard recommended height for upfiring Atmos drivers, the company was still able to calibrate them correctly for the demonstration via a Denon receiver. To showcase the speakers, Focal first played a Dolby demo clip featuring lots of nature effects with rain and thunder, creating an impressive dome of sound that reflected effects quite convincingly from above. An additional music clip was played as well which gradually spread cues around the room while expanding the audio in all directions. This demo was a little less directional, creating a more general sense of higher sound. And concluding the showcase with an appropriate bang, the company switched gears to the wildfire scene from the second season of Game of Thrones. As the explosion reverberated around the room, the subwoofer growled with a deep and escalating LFE cue while falling debris boomed from the Atmos drivers. 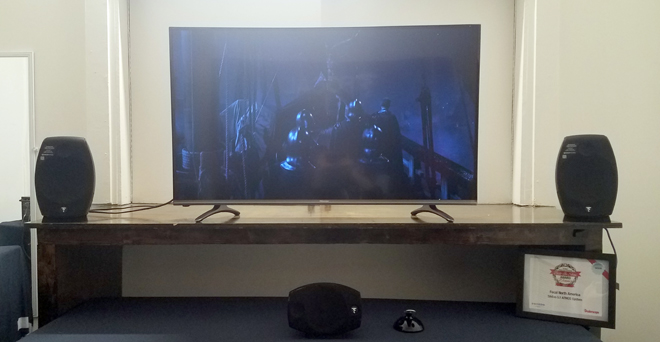 Overall, it was an impressive demonstration, offering upfiring effects that seemed to be on par with other Atmos speakers and modules that I've heard. Likewise, the general audio quality of the speakers themselves was great, with a full, spacious sound and clean dialogue despite the satellites' compact size. Likewise, the sub balanced well with the system, though there were some harsh vibrations in the floor every now and then (likely more a result of the less than ideal room than the woofer). With all that in mind, it's no surprise that the package received a CE Week Best in Show Award during the event.

In addition to competing in the TV Shootout with its QN65Q9 Ultra HD QLED TV, Samsung also had its own separate booth on the show floor, highlighting a few of its other 2017 AV products. The lineup included the 65" Class Q8C Curved QLED 4K TV, the 65-inch Frame Ultra HD TV, and the HW-MS650/ZA Sound+ Premium Soundbar.

Though I'm still not crazy about curved-screened panels, the Q8 looked quite beautiful in person. With quantum dot technology to deliver a max of about 1500 nits (according to Samsung), the set was able to maintain a strikingly vibrant and intense image even in the bright lighting conditions of the room.  An HDR demo reel of flowers and scrolling hues filled the screen, showing off the model's impressive color performance with lush reds, greens, and blues. Sadly, while the set does offer local dimming, the TV uses an edge-lit backlight which might hinder dark room performance a bit compared to full array local dimming models. 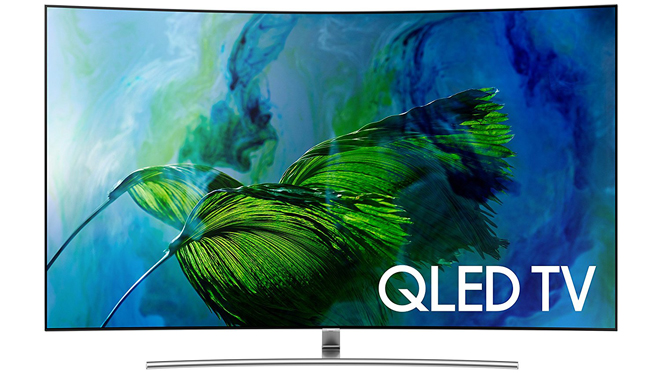 Still, for customers looking for a 4K display with great HDR10 performance in bright environments, this is definitely a set to keep in mind. The 65" Class Q8C Curved QLED 4K TV is now on sale for $3,498. 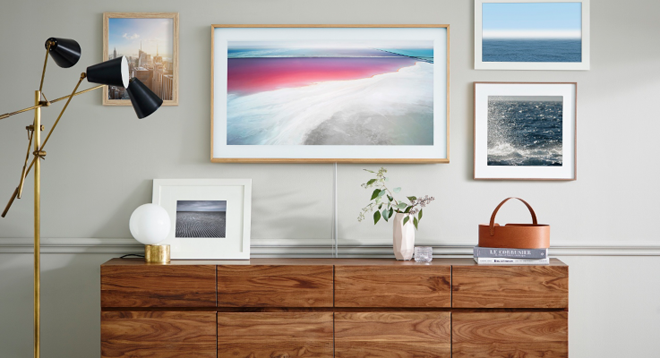 Meanwhile, the Frame Ultra HD TV turns its attention to an entirely different consumer base, switching emphasis away from nits and quantum dots to instead focus on aesthetics and design. Developed in collaboration with renowned designer Yves Behar, the display has been built to look like a picture frame hanging on a user's wall when not in use as a TV, complete with customizable accessories like interchangeable bezels and an optional Studio Stand. When the unit is placed in "Art Mode," the screen displays custom-designed digital art pieces instead of fading to black like a traditional television. Likewise, users can also save and upload their favorite personal art work or photographs using "My Collection."

At the show, Samsung demoed this feature by defaulting the panel to a sample layout of personal photos before cycling the display through different art pieces and pictures. In general, this all looked quite nice, and the handsome design might be appealing to users who want a display that blends in with their living room decor. With that said, the aesthetics alone likely won't justify the pricing for most customers -- especially considering the set's relatively low 400 nit HDR performance. Samsung's 65-inch Frame Ultra HD TV is now on sale for $2,798.

Finally, Samsung also had its new MS650 Sound+ Sound Bar on hand as well. The 3-channel sound bar features 9 speakers with dedicated amps, integrated bass, and the company's wide range tweeter for room-filling audio and a frequency response of 40Hz~20KHz. Dolby Digital and DTS processing are supported as well, along with Wi-Fi, Bluetooth, HDMI with 4K HDR passthrough, and HD audio playback. Unfortunately, though the sound bar looked nice enough in person, the device was not actually being demoed in the loud show environment so I can't offer any insights into its performance. Samsung's MS650 Sound+ Sound Bar is now available for $448.

Cleer used CE Week to spotlight some of it latest audio products as well, including its upcoming NEXT headphones. The audiophile headphones feature an open-back, alloy structure with an ironless magnesium driver to provide high-resolution sound with 30x less distortion at higher volumes. In addition, the unit uses soft-touch sheepskin and memory foam earpads and headband for extra comfort. Likewise, a 1.5m four-conductor audio cable with LEMO hardware is also integrated. In person, the headphones' high-tech aesthetic worked nicely and the device felt quite good over my ears. But cool looks and a nice fit are meaningless if the cans don't sound great. And thankfully, the NEXT sounds like it's going to be a strong performer. 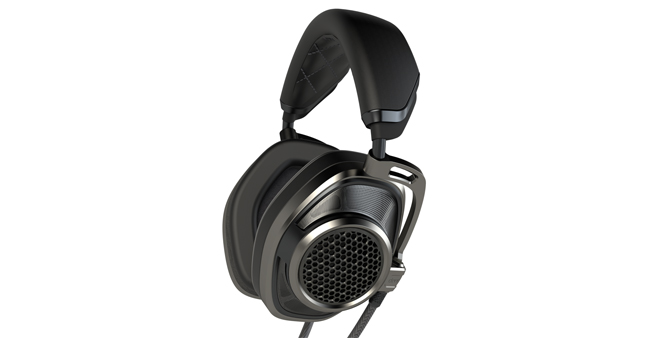 For the demo, I listened to a few hi-res audio tracks being played from an Onkyo DAP, including AC/DC's "Back in Black" and Daft Punk's "Get Lucky." Despite the loud environment, the audio came through well with a pleasingly spacious and intimate profile that evoked a similar quality to planar magnetic and electrostatic headphone models I've heard in the past. Bass beats were deep and resonant while balancing well with the mids and highs to create a great sense of depth and dynamic range in the vocals and instruments. I'd need to take a longer listen in a quiet space to form any kind of full opinion, but from what I head the headphones rightly earned their Gold Star Award at CE Week.

The Cleer NEXT Headphones are set to start shipping in September for an MSRP of $699.

No modern tech show would be complete without a virtual reality demo, and thankfully Merge VR was in attendance to satiate that craving. With their VR Goggles and upcoming Merge Cube on hand, I got to demo the company's latest virtual and augmented reality gear.

Unlike Google and Samsung's more expensive headsets which are only compatible with specific Android smartphones, the Merge VR Goggles are designed to work with most Android and iOS phones made in the last four years. But with their simplified construction and purple, lightweight foam build, they're clearly geared toward a younger crowd of kids, tweens... and childish adults like me.

For the demonstration, Merge was highlighting its new Cube augmented reality hologram toy to go along with the goggles. Basically, it's a normal physical cube that can fit in a user's palm, but when viewed through the VR Goggles it can be transformed into a variety of interactive objects and mini games. For instance, during my first demo, the cube turned into a pirate's telescope, allowing me to look through the cube with the headset on in order to see an island with ships and canons. Likewise, another demo turned the cube into a campfire that I could hold in my hands and another turned it into a bundle of fireworks I could set off and watch explode.

In these instances, just the cube itself was altered through the goggles for an augmented reality experience, leaving the rest of the room and my surroundings unaffected. One final mini game I tried, however, turned the cube into a spaceship and then placed me in a full virtual environment, allowing me to move the cube around and click on the headset's buttons in order to fly through space and shoot down enemies. 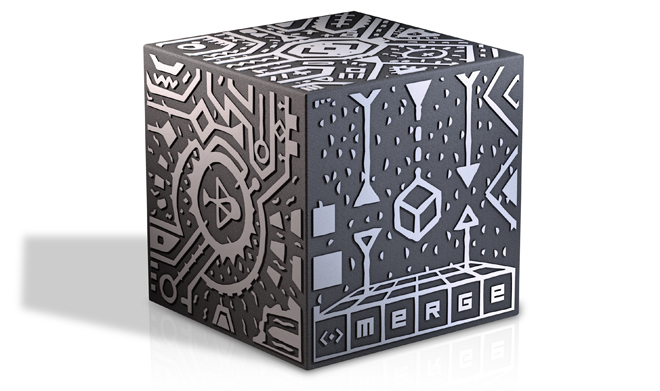 These were all very simple interactive experiences and the mini games didn't really have much depth to them, but I can definitely see this being a fun VR and AR toy for kids. The Merge VR Goggles are now available for $59. Meanwhile, the Merge Cube is set to go on sale later this summer for less than $20.

With a nice mixture of established brands, boutique companies, and exciting start-ups, CE Week offered a fun assortment of AV tech and gadgets.

We're hoping to get more hands-on time with some of the products featured here, but for now, what do you think about this year's crop of gear? Are you interested in any of the items highlighted? Let us know your thoughts in the forums! 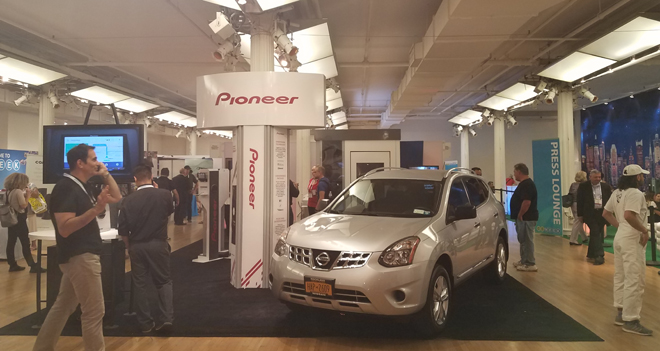