The cult horror flicks are oozing toward Blu-ray in December.

In an early announcement to retailers, Camp Motion Pictures is preparing 'Slime City/Slime City Massacre' for Blu-ray on December 13.

Available for the first time in High Definition, Gregory Lamberson's 1989 cult hit Slime City and 2010 sequel, Slime City Massacre, dripping with gruesome extras! Slime City (1989) - In a run-down apartment building in NYC, a student stumbles across the remains of a cult and transforms into a murderous, slime-dripping monster! Slime City Massacre (2010) - When a greedy real estate tycoon sends mercenaries into a bombed out city to destroy the homeless, they stumble across the remains of a cult of hideous, oozing slime creatures, sparking an all-out war for control of Slime City.

You can find the latest specs for 'Slime City/Slime City Massacre' linked from our Blu-ray Release Schedule, where it's indexed under December 13. 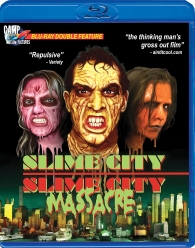