The tribute concert will celebrate the legendary composer's iconic themes on Blu-ray in June, and pre-orders are now live.

In an early announcement to retailers, C Major Entertainment is preparing 'A John Williams Celebration' for Blu-ray on June 30.

For the 2014/15 Opening Night Concert and Gala, the Los Angeles Philharmonic paid loving tribute to composer John Williams, long a champion and close friend of the LA Phil. Gustavo Dudamel, an awestruck fan of the musical icon, led the orchestra in a crosssection of Maestro Williams' matchless canon. Featuring Itzhak Perlman with a very special musical performance of pieces from Schindler's List as well as the Cadenza and variations from Fiddler on the Roof. Jazz elements will fill the air during Escapades from Catch Me if You Can, and may the force be with you during the iconic tunes from Star Wars.

You can find the latest specs for 'A John Williams Celebration' linked from our Blu-ray Release Schedule, where it's indexed under June 30. 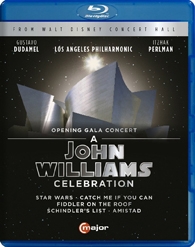 Discs mentioned in this article: (Click for specs and reviews)
A John Williams Celebration (Blu-ray)