The acclaimed dramatic thriller will be available on Blu-ray only at Best Buy next month.

In an early announcement to retailers, Broad Green Pictures will be releasing '99 Homes' on Blu-ray as a Best Buy exclusive on February 9.

In this timely thriller, single father Dennis Nash (Andrew Garfield) is evicted from his home and his only chance to win it back is to go to work for Rick Carver (Michael Shannon), the charismatic and ruthless businessman who evicted him in the first place. It's a deal-with-the-devil that provides security for his family; but as Nash falls deeper into Carver's web, he finds his situation grows more brutal and dangerous than he ever imagined.

Specs haven't been revealed yet, but supplements include: Director's Commentary with Ramin Bahrani and a deleted scene.

You can find the latest specs for '99 Homes' linked from our Blu-ray Release Schedule, where it is indexed under February 9. 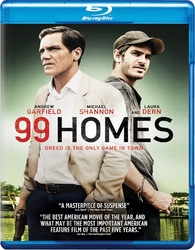