In an early announcement to retailers, Broad Green Pictures will be releasing 'The Neon Demon' on Blu-ray on September 27.

The Neon Demon is a sumptuous horror-thriller, set in the highly competitive and often vicious world of fashion modeling, where the term "eat their own" takes on a decidedly new meaning. When aspiring model Jesse (Fanning) moves to Los Angeles, her youth and vitality are devoured by a group of beauty-obsessed women who will use any means necessary to get what she has.

Shot in Los Angeles, the "city of dreams," The Neon Demon, features a driving electronic soundtrack by Cliff Martinez, who previously composed the celebrated scores for Refn's films Drive and Only God Forgives, and stunning high fashion by costume designer and past Refn collaborator Erin Benach (Drive).

The Blu-ray will feature 1080p video, lossless 5.1 audio, and supplements include: audio commentary with Director Nicolas Winding Refn and Elle Fanning, and two featurettes – “Behind the Soundtrack of The Neon Demon” and “About The Neon Demon.”

You can find the latest specs for 'The Neon Demon' linked from our Blu-ray Release Schedule, where it is indexed under September 27. 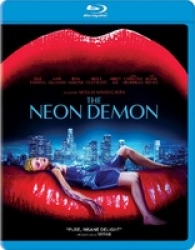