The 2015 comedy starring Kate Winslet, Hugo Weaving, and Liam Hemsworth is planned for Blu-ray in December.

As previously reported, Broad Green Pictures is working on 'The Dressmaker' for Blu-ray on December 27.

Jocelyn Moorhouse directs this Australian revenge comedy starring Kate Winslet as Myrtle Dunnage, a woman who returns to her hometown to take care of her ailing mother Molly (Judy Davis). Myrtle's return sparks much debate between the residents of the town as she was accused of murdering someone many years ago. Now an expert dressmaker, Myrtle goes about transforming the local fashion while exacting her revenge upon those who have wronged her in the past... The supporting cast includes Liam Hemsworth and Hugo Weaving.

You can find the latest specs for 'The Dressmaker' linked from our Blu-ray Release Schedule, where it is indexed under December 27. 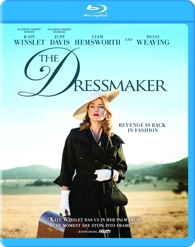 Discs mentioned in this article: (Click for specs and reviews)
The Dressmaker (Blu-ray)