Winner of 6 academy Awards- Chicago is a dazzling spectacle cheered by audiences and critics alike! At a time when crimes of passion result in celebrity headlines, nightclub sensation Velma Kelly (Catherine Zeta-Jones) and spotlight seeking Roxie Hart (Renée Zellweger) both find themselves sharing space on Chicago's famed Murderess Row! They also share Billy Flynn (Richard Gere), the town's slickest lawyer with a talent for turning notorious defendants into local legends. But in Chicago, there's only room for one legend!

The release doesn't appear to have anything new aside from the SteelBook packaging, as the bonus materials are all legacy features. 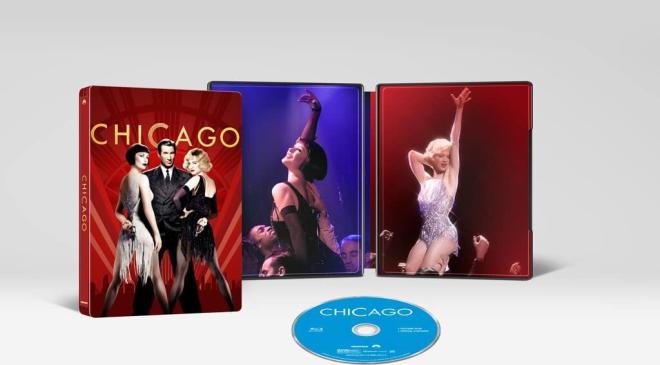 Order your copy today and here is the full press release:

The Limited-Edition Blu-ray SteelBook includes access to a Digital copy of the film and boasts over three hours of legacy bonus content, including commentary with director Rob Marshall and screenwriter Bill Condon, an extensive look at the film with cast and crew interviews, plus extended musical performances.  Bonus content is detailed below:

Discs mentioned in this article: (Click for specs and reviews)
Chicago [SteelBook] (Blu-ray)