Part of the Lenbrook Group of Brands that also includes NAD Electronics and PSB Speakers, Bluesound is now in its second generation of gear and continues to use the 50 years of audio expertise from its related companies to its advantage.

Made "by audiophiles for audiophiles," Bluesound's products emphasize sound quality and hi-res music support, offering the convenience of multi-room wireless connectivity without losing the ability to produce studio-master-level audio. And with its latest sound bar model, the company is expanding this approach to movies as well, bringing support for compact, wireless Dolby Digital 5.1 audio to the home theater.

Armed with a versatile collection of speakers and components, the demo primarily highlighted two devices: The Pulse Sound Bar and the PowerNode 2 Streaming Amp, while also touching upon a few additional models in the lineup. Here's a rundown of our impressions...

To kick off the demo, Bluesound spotlighted its currently available Pulse Sound Bar, which recently received a price reduction from $999 to $799 for the black model and $899 for the white model. Part of the company's second generation lineup, the Pulse Sound Bar is designed to serve as a users' all-in-one audio hub with robust control and streaming options via the free BluOS App for iOS or Android. The device features 6 Integrated high-performance speakers and 2 Passive Radiators, along with a 120 watt DirectDigital Amplifier DAC. Optical, RCA, Wi-Fi, Bluetooth with aptX, and USB connectivity are all included as well, though the unit does not feature any HDMI ports or video passthrough options. This omission was made to help simplify setup and focus squarely on audio while letting your display handle all the other work.

From a design perspective, the sound bar carries a nice aesthetic with versatile placement options thanks to a kickstand and wall mount brackets. With that said, at 5.5-inches high, the unit is rather tall, which will likely make it a bit tricky to place in front of some displays without blocking part of the screen. Thankfully, Bluesound has a solution for this with its own Universal TV Stand built to house the sound bar and a display (up to 65-inches). 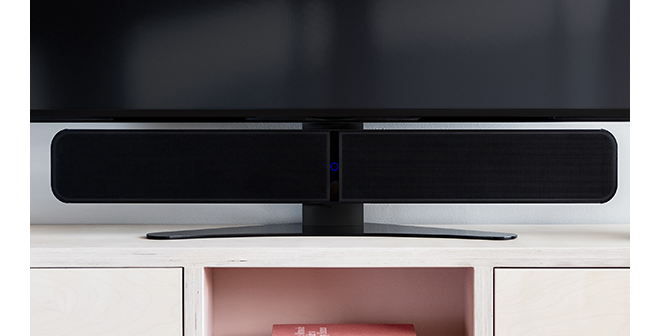 And while the unit has been designed to provide healthy bass on its own, a wireless subwoofer transmitter is also integrated, allowing users to add a separate Pulse Sub for even more robust LFE. The Pulse Sub uses a 6 1/2” (165mm) Polyproplene cone and is rated for 100 Total Watts Dynamic Peak power and a frequency response of 26Hz - 150Hz. Unlike most traditional subwoofers, the unit features a unique slim, rectangular design for flexible placement beside, behind, and underneath furniture, or even mounted to a wall. 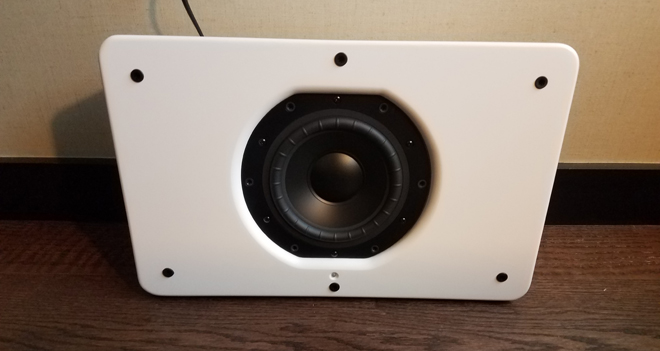 In addition, beyond the sub and sound bar, customers can also pair two Pulse Flex wireless speakers with the system to serve as rear satellites, completing a full surround sound setup with wireless Dolby Digital 5.1 compatibility. The Pulse Flex features a custom 3.5" driver and 1" driver. Bluetooth with aptX, Wi-Fi, Toslink, 3.5mm, USB, and headphone connectivity are all included, and the device supports an optional battery pack for portable playback.

For demo purposes, we listened to a hi-res streaming track of Beyonce's "Daddy Lessons" through Tidal using the sound bar's music mode. The speaker offered a nice, full-bodied audio profile with rich mids, clean highs, and a surprisingly deep low-end. Stereo separation was also solid, providing an enveloping presence throughout the room. For comparisons sake, Bluesound also paired a wireless Pulse Sub to the system, offering some extra oomph to the track's bass response giving the system an even more robust quality. According to the company, connecting the sub also improves the audio quality of the sound bar itself as it allows the processor and drivers to focus on the mids and highs, alleviating some of the heavy lifting.

Unfortunately, as nice as the track sounded, we ran into some pesky Wi-Fi issues in the hotel room used for the demonstration making it a bit difficult to control playback and listen to other tracks. To be clear, this was an issue more specific to the hotel's lackluster connectivity than anything having to do with the sound bar's actual performance, but it still limited how much I actually got to hear.

Looking to the future, Bluesound also emphasized its regular software updates for the Pulse Sound Bar, allowing the company to add new features to the device when they become available. On that note, the reps stated that voice control features are a possibility, but they're waiting to see how the technology evolves.

Beyond speakers, Bluesound also offers a collection of wireless audio components, including the Node 2 Streaming Music Player, the Powernode 2 Streaming Integrated Amplifier, and the Vault 2 CD Ripper and Streamer.

Meanwhile, the Powernode 2 offers the same functionality as the Node 2 plus amp support for driving stereo speakers with tech borrowed from Bluesound's sister company, NAD Electronics. The unit's HybridDigital Amplifier is rated for 60 Watts x2 into 8ohms. Finally, the Vault 2 once again offers similar streaming media player capabilities as the Node 2, but this time with the added benefits of an integrated 2 TB hard drive with the ability to rip CDs in lossless high-res or MP3 formats, and the option to download and store high-res tracks.

For demo purposes, I got to listen to the Powernode 2 Integrated Amp in action through a pair of tower speakers from Bluesound's sister brand, PSB Speakers. All of the music was being played from a connected USB device. The first track we listened to was a hi-res FLAC file from artist Shelby Lynne. The song came through with rich fidelity and a nice, intimate quality in the vocals. As the track played I also got to check out the system's beautiful Controller App interface on a mobile device, offering easy navigation, detailed tech info for the song, album art, playlist creation, and other standard bells and whistles customers have come to expect from other similar platforms. 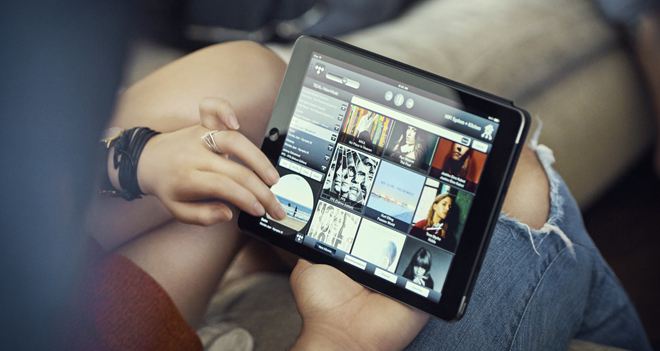 For the next track, we listened to Daft Punk's "Get Lucky," first as a standard FLAC file and then as an MQA encoded file. Both sounded quite good with a deep, steady bass beat behind warm vocals -- but I couldn't really detect any major difference between the two. Either way, the music offered a great demonstration of the Powernode 2's hi-res audio support, allowing users to stream a variety of formats from a wide array of sources.

Though my time with Bluesound's lineup was relatively brief, the company's focus on hi-res playback and wireless connectivity has the potential for a winning combination. The multi-room audio space is becoming an increasingly crowded market with a growing assortment of viable options for casual and quality-minded users alike, but key design and feature perks on the Pulse Sound Bar and Powernode 2 are certainly worth an audiophile's consideration.

Unfortunately, the Wi-Fi issues and listening conditions didn't really lend themselves to hearing all of the nuances that might help further separate Bluesound from the competition, but we're hoping to get more one-on-one time with some of these products soon. With that in mind, be sure to check back for more impressions and full reviews in the near future! 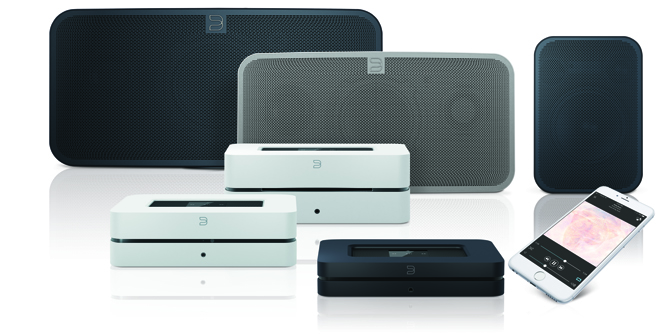