In an announcement to retailers, Big World Pictures has released 'Aferim!' on Blu-ray.

Eastern Europe, 1835. Two riders cross a barren landscape in the middle of Wallachia. They are the gendarme Costandin and his son. Together they are searching for a gypsy slave who has run away from his nobleman master and is suspected of having an affair with the noble's wife. While the unflappable Costandin comments on every situation with a cheery aphorism, his son takes a more contemplative view of the world. On their odyssey they encounter people of different nationalities and beliefs: Turks and Russians, Christians and Jews, Romanians and Hungarians. Each harbors prejudices against the others which have been passed down from generation to generation. And even when the slave Carfin is found, the adventure is far from over...

Radu Jude's third feature has been aptly compared to films as diverse as THE SEARCHERS, THE LAST DETAIL and PULP FICTION (the latter for its rambling, coarse and endlessly entertaining dialogues), but the film is ultimately a moving parable about late-feudal Europe developed from historical documents and songs: its power structures and hierarchies, people's ideas of themselves and others, interaction with minorities and the resulting conflicts. A Balkan Western in black-and-white that brings the cacophony of the times strikingly to life and explores the thematic arcs that stretch into the present.

Jude, whose previous feature films (THE HAPPIEST GIRL IN THE WORLD and EVERYBODY IN OUR FAMILY) received accolades at numerous festivals in Europe and the US, is also known for a string of prize-winning short films, including THE TUBE WITH A HAT (2006), which took the top prize at Sundance and 15 other awards at festivals around the world. AFERIM! was produced by Ada Solomon's Hi Film, which also produced Golden Bear winner CHILD'S POSE (2013).

Specs have not been detailed, but supplements include: Radu Jude's 23-minute short film, 'THE TUBE WITH A HAT.'

You can find the latest specs for 'Aferim!' linked from our Blu-ray Release Schedule, where it's indexed under June 28. 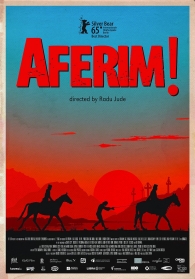 Discs mentioned in this article: (Click for specs and reviews)
Aferim! (Blu-ray)