The classic animated series starring the Chipmunks is heading to Blu-ray later this year.

In an early announcement to retailers, Bagdasarian is working on 'The Alvin Show' for Blu-ray on March 10.

Following the incredible popularity of the novelty record "The Chipmunk Song", this animated series about the singing rodents was created. Manager David Seville spends his days taking care of his young chipmunk charges, Alvin, Simon and Theodore, as they regularly get into one type of trouble after another. Included in each episode was a cartoon featuring inventor Clyde Crashcup and his assistant, Leonardo.

You can find the latest specs for 'The Alvin Show' linked from our Blu-ray Release Schedule, where it is indexed under March 10. 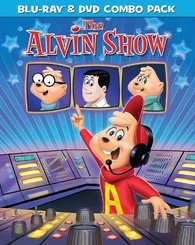