The psychological horror flick is now available on Blu-ray.

From its gloomy opening to its tragic conclusion, Observance is a film that captivates the viewer with an inescapable sense of dread rarely felt in contemporary horror. Directed by Joseph Sims-Dennett, the film stands as a testament to Australia s growing movie industry and the versatility of horror films. Borrowing from both classic sources, like Hitchcock, and relatively recent inspirations, like Takashi Shimizu, Joseph has managed to create a patient thriller that knows exactly when to start the scares...Channeling the best of classic voyeur films like Rear Window while still clinging firmly to its horror roots with some terrifying moments that would make David Cronenberg proud, Observance presents us with a cleverly paced ride into madness. --Bloody Disgusting.

You can find the latest specs for 'Observance' linked from our Blu-ray Release Schedule, where it is indexed under August 2. 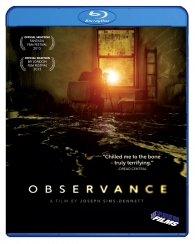