The horror flick is heading to Blu-ray in June. You can pre-order the disc here.

In an early announcement to retailers, Artsploitation Films is preparing ''Horsehead' for Blu-ray on June 23.

Haunting and horrific, surreal and shocking, 'Horsehead' is a new horror-fantasy that pays tribute to the classic European shockers of Dario Argento and Mario Bava while also remaining a unique film with its own vision, delivering unforgettable images that both disturb and enchant. Director Romain Basset s tale follows beautiful young Jessica (Lilly-Fleur Pointeaux) as she returns to her family s countryside estate for her grandmother s funeral. Haunted by recurring nightmares of a horse-headed monster, Jessica attempts to put her studies of lucid dreaming to good use, as she semi-consciously navigates through this dream landscape, trying to discover the secrets behind this sinister apparition. But Jessica must also cope with a hostile mother (The Beyond's Catriona MacColl), and the growing realization that the death of her grandmother was actually a suicide triggered by the woman s past traumas and visions. 'Horsehead' is a feverish, ethereal journey through the world of nightmares.

Specs have not been detailed yet, but supplements will include: Original Trailer; Inside Horsehead - Making of featurette; and Four Short Films.

You can find the latest specs for 'Horsehead' linked from our Blu-ray Release Schedule, where it's indexed under June 23. 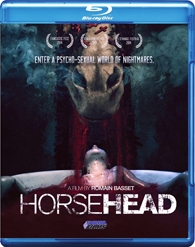 Discs mentioned in this article: (Click for specs and reviews)
Horsehead (Blu-ray)