The German horror film is set for Blu-ray in June, and you can pre-order the movie now.

In an early announcement to retailers, Artsploitation Films is preparing 'Der Samurai' for Blu-ray on June 9.

A shape-shifting cross-dressing psychopath wielding a samurai sword cuts a bloody swath of carnage through a small German village in this surreal mix of violence, sexual desire and dark comedy that recalls early David Lynch. The only person to confront this decapitating murderer is an uptight young policeman whose pursuit soon becomes a deadly game of cat-and-mouse as an odd bond forms between the two men. Completely bizarre yet wildly entertaining, 'Der Samurai' is a horror must-see for the adventurous!

Specs have not been announced yet, but supplements will include: Audio Commentary by Till Kleinert and producer Linus de Paoli; Original Theatrical Trailer; and Behind the Scenes Featurette.

You can find the latest specs for 'Der Samurai' linked from our Blu-ray Release Schedule, where it's indexed under June 9. 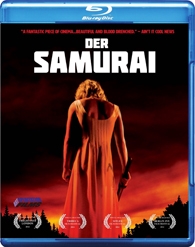 Discs mentioned in this article: (Click for specs and reviews)
Der Samurai (Blu-ray)