The 1972 giallo thriller with one of the longest movie titles ever will arrive on Blu-ray in April.

In an early announcement to retailers, Arrow will be releasing 'Your Vice Is a Locked Room and Only I Have the Key' on Blu-ray on April 5.

Loosely based on Edgar Allan Poe s classic tale The Black Cat , Your Vice Is a Locked Room and Only I Have the Key, from director Sergio Martino (Torso), weaves the key motifs from Poe s gothic yarn into one of the most sensual films from the Golden era of giallo.

Notable for giving screen starlet Edwige Fenech her first bad girl role, Your Vice Is a Locked Room and Only I Have the Key, with its many unexpected twists and turns, is just as bewitching as its title would suggest.

The Blu-ray will feature a brand new 2K restoration from the original camera negative, a lossless mono soundtrack, and supplements include: Through the Keyhole - a brand new interview with director Sergio Martino; Unveiling the Vice making-of retrospective featuring interviews with Martino, star Edwige; Fenech and screenwriter Ernesto Gastaldi; Dolls of Flesh and Blood: The Gialli of Sergio Martino a visual essay by Michael Mackenzie exploring the director s unique contributions to the giallo genre; The Strange Vices of Ms. Fenech film historian Justin Harries on the Your Vice actress prolific career; Eli Roth on Your Vice and the genius of Martino; and a reversible sleeve featuring original and newly commissioned artwork by Matthew Griffin.

You can find the latest specs for 'Your Vice Is a Locked Room and Only I Have the Key' linked from our Blu-ray Release Schedule, where it is indexed under April 5. 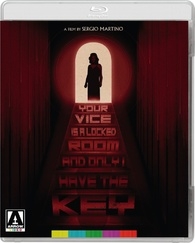