Marco Ferreri's controversial film is headed for Blu-ray this summer.

In an early announcement to retailers, Arrow Video is preparing to release 'La Grande Bouffe' on Blu-ray on August 18.

The most famous film by Italian provocateur Marco Ferreri (Dillinger is Dead), La Grande bouffe was reviled on release for its perversity, decadence and attack on the bourgeoisie yet won the prestigious FIPRESCI prize after its controversial screening at the Cannes Film Festival.

Four friends, played by international superstars Marcello Mastroianni (Fellini's 8½), Michel Piccoli (Belle de jour), Ugo Tognazzi (Barbarella) and Philippe Noiret (Zazie dans le métro) retreat to a country mansion where they determine to eat themselves to death whilst engaging in group sex with prostitutes and a local school teacher (Andréa Ferréol, The Tin Drum), who seems to be up for anything...

At once jovial and sinister, the film's jet-black humour has a further twist as the reputed actors (whose characters use their own names) buck their respectable trend for a descent into fart-filled chaos that delivers a feast for the eyes and mind.

The Blu-ray/DVD Combo Pack will feature brand new 2K restoration of the original camera negative; Reversible sleeve featuring original and newly commissioned artwork by Gilles Vranckx; Original French audio (uncompressed PCM on the Blu-ray); Newly translated English subtitles; The Farcical Movie - A French television profile of Marco Ferreri from 1975 in which the director discusses, among other things, the influence of Tex Avery, Luis Buñuel and Tod Browning's Freaks; Behind-the-scenes footage of the making of La Grande bouffe, containing interviews with Ferrari and actors Marcello Mastroianni, Michel Piccoli, Ugo Tognazzi and Philippe Noiret; Extracts from the television series Couleurs autour d'un festival featuring interviews with the cast and crew recorded during the Cannes Film Festival; A visual essay on the film with by Italian film scholar Pasquale Iannone; Select scene audio commentary by Iannone; News report from the Cannes Film Festival where La Grande bouffe caused a controversial stir, including Ferreri at the press conference; Original Trailer; and a booklet featuring new writing on the film by Johnny Mains, illustrated with original archive stills and posters.

You can find the latest specs for 'La Grande Bouffe' linked from our Blu-ray Release Schedule, where it is indexed under August 18. 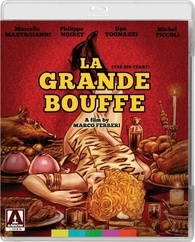