The crime flicks are coming to Blu-ray in March.

In an early announcement to retailers, Arrow is preparing 'Dead or Alive Trilogy' for Blu-ray on March 14.

Beginning with an explosive, six-minute montage of sex, drugs and violence, and ending with a phallus-headed battle robot taking flight, Takashi Miike's unforgettable Dead or Alive Trilogy features many of the director's most outrageous moments set alongside some of his most dramatically moving scenes. Made between 1999 and 2002, the Dead or Alive films cemented Miike's reputation overseas as one of the most provocative enfants terrible of Japanese cinema, yet also one of its most talented and innovative filmmakers.

In Dead or Alive, tough gangster Ryuichi (Riki Takeuchi) and his ethnically Chinese gang make a play to take over the drug trade in Tokyo's Shinjuku district by massacring the competition. But he meets his match in detective Jojima (Show Aikawa), who will do everything to stop them. Dead or Alive 2: Birds casts Aikawa and Takeuchi together again, but as new characters, a pair of rival yakuza assassins who turn out to be childhood friends; after a botched hit, they flee together to the island where they grew up, and decide to devote their deadly skills to a more humanitarian cause. And in Dead or Alive: Final, Takeuchi and Aikawa are catapulted into a future Yokohama ruled by multilingual gangs and cyborg soldiers, where they once again butt heads in the action-packed and cyberpunk-tinged finale to the trilogy.

Each of them unique in theme and tone, the Dead or Alive films showcase Miike at the peak of his strengths, creating three very distinct movies connected only by their two popular main actors, each film a separate yet superb example of crime drama, character study, and action filmmaking.

The Blu-rays will feature 1080p video, uncompressed stereo soundtracks, and supplements will include:

You can find the latest specs for 'Dead or Alive Trilogy' linked from our Blu-ray Release Schedule, where it's indexed under March 14. 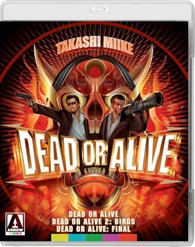 Discs mentioned in this article: (Click for specs and reviews)
Dead or Alive Trilogy (Blu-ray)