There Will Be a 'Blood Bath' on Blu-ray in May

The Roger Corman produced horror flick will make a splash on Blu-ray in May.

In an early announcement to retailers, Arrow Video is preparing 'Blood Bath' for Blu-ray on May 31.

The films of Roger Corman are often as well-known for their behind-the-scenes stories as they are the ones unfolding on the screen. He famously made Little Shop of Horrors in just two days using sets left over from A Bucket of Blood and shot The Terror over a long weekend because bad weather prevented him from playing tennis. But none of these tales is quite so complex, or quite so extraordinary, as the making of Blood Bath.

The saga began when Corman invested in a Yugoslavian Krimi-like picture entitled Operation Titian just prior to it going into production. Insisting it be filmed in English, he sent actors William Campbell and Patrick Magee, and uncredited story editor Francis Ford Coppola (all fresh from Dementia 13), to Dubrovnik to make a US-friendly movie but wasn't satisfied with the end results. First it was re-cut and re-scored to create Portrait in Terror, a film more in line with drive-in tastes, then it was handed over to Jack Hill (Spider Baby), followed by Stephanie Rothman (Terminal Island), each undertaking reshoots that resulted in a vampire picture by the name of Blood Bath. One final twist was provided when a TV version was required, chopping scenes and adding others to create Track of the Vampire.

For this release Arrow Video has searched through the vaults to bring you all four versions of Blood Bath, newly restored from the best materials available to provide a definitive release of one of Corman's craziest ventures.

Specs have not been detailed yet, but supplements will include: Four versions of the film: Operation Titian, Portrait in Terror, Blood Bath and Track of the Vampire; Brand new reconstruction of Operation Titian using original film materials and standard definition inserts; The Trouble with Titian Revisited - a brand new visual essay in which Tim Lucas returns to (and updates) his three-part Video Watchdog feature to examine the convoluted production history of Blood Bath and its multiple versions; Bathing in Blood with Sid Haig - a new interview with the actor, recorded exclusively for this release; Outtakes from Track of the Vampire, scanned from original film materials; Double-sided fold-out poster featuring original and newly commissioned artworks; Reversible sleeve featuring original and newly commissioned artwork by Dan Mumford; and Limited edition booklet containing new writing on the film and its cast by Peter Stanfield, Anthony Nield, Vic Pratt and Cullen Gallagher.

You can find the latest specs for 'Blood Bath' linked from our Blu-ray Release Schedule, where it's indexed under May 31. 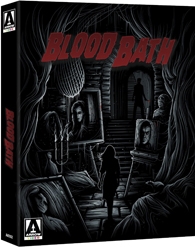 Discs mentioned in this article: (Click for specs and reviews)
Blood Bath (Blu-ray)