Fourteen of the Godfather of Gore's films are headed to Blu-ray in October.

In an early announcement to retailers, Arrow Video is preparing 'The Herschell Gordon Lewis Feast' for Blu-ray on October 25. A special 'Shock and Gore' edition will also be available in very limited quantities.

In 1963, director Herschell Gordon Lewis pulled a cow s tongue out of an actress mouth on camera, and in doing so, changed the landscape of horror cinema forever. That sequence was just one of numerous gruesome gags featured in Blood Feast, the film credited as being the world s first gore movie. It s no exaggeration to say that the modern gross-out movies of today owe their very existence to the pioneering efforts of H.G. Lewis. But whilst Lewis is most widely celebrated for his blood-and-guts epics (Two Thousand Maniacs!, The Wizard of Gore et al.), there s more to the prolific director than splatter. From tales of sordid photographers (Scum of the Earth) to sex robots (How to Make a Doll), from biker girl-gangs (She-Devils on Wheels) to youths-run-amok (Just for the Hell of It), and from psychic witches (Something Weird) to hard liquor-loving hillbillies (Moonshine Mountain), the filmography of H.G. Lewis reads like a veritable wish-list of exploitation movie madness. Now, for the first time ever, Arrow Video is proud to present fourteen of the Godfather of Gore's most essential films (including nine Blu-ray world debuts), collected together in a Limited Edition set (only 2,500 in the U.S.) and packed full of eye-popping bonus content. So put your feet up, pour yourself a glass of good ol moonshine, and prepare yourself for a feast H.G. Lewis style! Includes: Blood Feast, Scum of the Earth, Two Thousand Maniacs!, Moonshine Mountain, Color Me Blood Red, Something Weird, The Gruesome Twosome, A Taste of Blood, She-Devils on Wheels, Just for the Hell of It, How to Make a Doll, The Wizard of Gore, The Gore Gore Girls, This Stuff ll Kill Ya!

In addition, the 'Shock and Gore' edition will also include: Fully-illustrated 92-page art book featuring the definitive overview of the entire career of H.G. Lewis written by Stephen Thrower, with a brand new foreword by Lewis; 160-page paperback of the original Blood Feast novelization, written by Lewis; 7" vinyl single featuring select tracks from the Blood Feast score; 14 postcards featuring original artwork for all the films included; Individually handmade "super gory" eyeball; Shock and Gore commemorative barf bag; and Newly illustrated packaging and books by The Twins of Evil.

You can find the latest specs for 'The Herschell Gordon Lewis Feast' linked from our Blu-ray Release Schedule, where it's indexed under October 25. 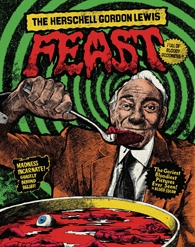