The action movie will seek vengeance on Blu-ray in March.

In an early announcement to retailers, Arrow Video is preparing 'Rage of Honor' for Blu-ray on March 15.

Following his star turns in 80s actioners 'Enter the Ninja' and 'Revenge of the Ninja,' Sho Kosugi continued his domination of the US martial arts movie with 1987's 'Rage of Honor' helmed once again by 'Pray for Death' director Gordon Hessler (The Golden Voyage of Sinbad). Federal agent Shiro Tanaka (Kosugi) used to live for his job now, he lives only for revenge. When his partner is killed during a bungled drug bust, Shiro throws away his badge and the rule book with it: arming himself with an array of deadly weaponry including nunchucks, blades and ninja stars he sets out to Buenos Aires to settle the score with the bad guys. Packing explosions, flying kicks and somersaults aplenty (as well as some truly logic-bending stunt sequences), 'Rage of Honor' sees Kosugi at the top of his game as he battles his way from the streets of the urban jungle to the very literal jungles of South America.

Specs have not been detailed yet, but supplements will include: Sho and Tell Part 2: The Domination brand new interview with star Sho Kosugi on Rage of Honor and the later stages of his film career; Sho Kosugi Trailer Gallery: Enter the Ninja (1981), Revenge of the Ninja (1983), Pray for Death (1985) and Rage of Honor (1987); Reversible sleeve featuring original and newly commissioned artwork by Matthew Griffin; and the first pressing includes a collector's booklet featuring new writing on the film and an extract from Kosugi s upcoming book.

You can find the latest specs for 'Rage of Honor' linked from our Blu-ray Release Schedule, where it's indexed under March 15. 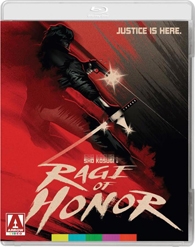 Discs mentioned in this article: (Click for specs and reviews)
Rage of Honor (Blu-ray)