The 80s action flick will seek vengeance on Blu-ray in February.

In an early announcement to retailers, Arrow Video is preparing 'Pray for Death' for Blu-ray on February 23.

In 'Pray for Death,' martial arts legend Sho Kosugi (Enter the Ninja, Ninja 3: The Domination) stars as a family man driven to exact vigilante justice ninja style! Japanese Restauranteur Akira (Kosugi) has taken his wife and two boys to the United States in search of a better life. But their slice of the American Dream is quickly soured when they fall foul of a group of vicious jewellery thieves. Unfortunately for the bad guys, they didn't count on Akira being a secret black ninja. The samurai sword of vengeance falls swift and hard in this classic slice of 80s ninja action from director Gordon Hessler (Scream and Scream Again, The Golden Voyage of Sinbad), culminating in an action-packed showdown with a bodycount worthy of Commando.

Specs have not been detailed yet, but supplements will include: Brand new interview with star Sho Kosugi; Archive interview and Ninjitsu demonstration with Kosugi from the film s New York premiere; Original Theatrical Trailer; Reversible sleeve featuring original and newly commissioned artwork by Matthew Griffin; and The first pressing also includes a collector's booklet featuring an extract from Sho Kosugi s upcoming biography.

You can find the latest specs for 'Pray for Death' linked from our Blu-ray Release Schedule, where it's indexed under February 23. 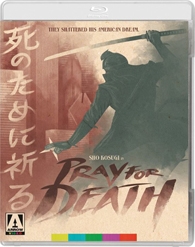 Discs mentioned in this article: (Click for specs and reviews)
Pray for Death (Blu-ray)