Two of the director's giallo thrillers will terrorize Blu-ray in May.

In an early announcement to retailers, Arrow Video is preparing 'Killer Dames: Two Gothic Chillers by Emilio P. Miraglia' for Blu-ray on May 24.

At the height of the Italian giallo boom in the early 1970s, scores of filmmakers turned their hand to crafting their own unique takes on these lurid murder-mystery thrillers. This limited edition double pack features two distinctive offerings by Emilio P. Miraglia, which meld twisty whodunit narratives with gothic chills.

In 'The Night Evelyn Came Out of the Grave,' troubled aristocrat Alan Cunningham (Anthony Steffen, Django the B*stard), haunted by the death of his first wife Evelyn, tries to move on by marrying the seductive Gladys (Marina Malfatti, All the Colours of the Dark). Marital bliss is short-lived, however, as various relatives meet untimely and gruesome deaths, prompting speculation that a vengeful Evelyn has risen from the grave...

The Blu-ray will feature 1080p video, a DTS-HD MA mono soundtrack, and supplements will include: New audio commentary by Troy Howarth; Exclusive introduction by actress Erika Blanc; Writer Stephen Thrower on The Night Evelyn Came Out of the Grave; The Night Erika Came Out of the Grave exclusive interview with Erika Blanc; The Whip and the Body archival interview with Erika Blanc; Still Rising from the Grave archival interview with production designer Lorenzo Baraldi; Original Italian and US theatrical trailers; and Reversible sleeve featuring original and newly commissioned artwork by Gilles Vranckx.

Meanwhile, in 'The Red Queen Kills Seven Times,' an age-old family curse hits sisters Kitty (Barbara Bouchet, Milano Calibro 9) and Franziska (Marina Malfatti) following the death of their grandfather Tobias (Rudolf Schündler, The Exorcist, Suspiria). Every hundred years, so the legend goes, the bloodthirsty Red Queen returns and claims seven fresh victims. Was Tobias just the first... and are Kitty and Franziska next?

You can find the latest specs for 'Killer Dames: Two Gothic Chillers by Emilio P. Miraglia' linked from our Blu-ray Release Schedule, where it's indexed under May 24. 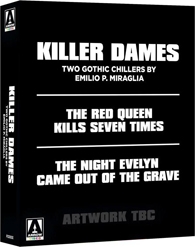