The horror trilogy will terrorize Blu-ray in December.

In an early announcement to retailers, Arrow Video is preparing 'Hellraiser: The Scarlet Box Limited Edition Trilogy' for Blu-ray on December 13.

Stephen King was once quoted as saying: I have seen the future of horror... his name is Clive Barker. That future became reality when, in 1987, Barker unleashed his directorial debut Hellraiser launching a hit franchise and creating an instant horror icon in the formidable figure of Pinhead.

Barker's original Hellraiser, based on his novella The Hellbound Heart, follows Kirsty Cotton (Ashley Laurence) as she comes head-to-head with the Cenobites demonic beings from another realm who are intent on reclaiming the soul of her deviant Uncle Frank. Picking up immediately after the events of the original Hellraiser, Hellbound: Hellraiser II finds Kirsty detained at a psychiatric institute and under the care of Phillip Channard, a doctor who abuses his position to realise his own dark aims. In Hellraiser III: Hell on Earth, a reporter investigating a mysterious death at a nightclub finds herself in the way of Pinhead and the Cenobites, who plan to bring their horrifying world into our own.

Coming at a time when the genre was degenerating into self-parody, Hellraiser offered a fiercely unique vision that approached its horrors with a far greater degree of seriousness than many of its contemporaries.. Along with its sequels, the Barker-produced Hellbound and Hell on Earth, Arrow Video is proud to present some of the most terrifyingly original films in the history of horror in brand new 2K transfers. 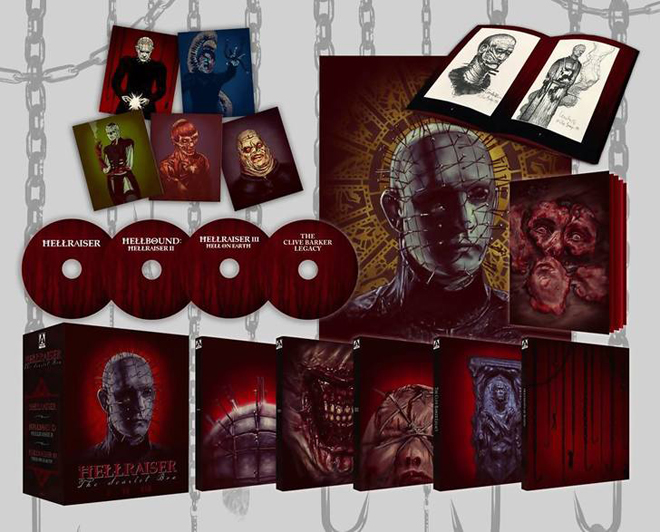 The 4-Disc Blu-ray colleciton will include:

DISC 4 – THE CLIVE BARKER LEGACY – LIMITED EDITION EXCLUSIVE
•Clive Barker short films Salomé and The Forbidden
•Books of Blood & Beyond: The Literary Works of Clive Barker – horror author David Gatward provides a tour through Barker’s written work, from the first Books of Blood to the recent The Scarlet Gospels
•Hellraiser: Evolutions – a brand new documentary looking at the evolution of the hit horror franchise and its enduring legacy, featuring interviews with Scott Derrickson (director, Hellraiser: Inferno), Rick Bota (director, Hellraiser: Hellseeker, Deader and Hellworld), Stuart Gordon (director, Re-Animator, From Beyond) and others
•The Hellraiser Chronicles: A Question of Faith – short film
200-PAGE BOOK – ‘DAMNATION GAMES’ – LIMITED EDITION EXCLUSIVE
•Exclusive 200-page hardback book with new writing on Hellraiser and the Barker universe from Barker archivists Phil and Sarah Stokes – including chapters looking at Barker’s early work, the genesis and production of the first 3 films in the Hellraiser series and much more, all illustrated with stills and rare material from the Barker archive

You can find the latest specs for 'Hellraiser: The Scarlet Box Limited Edition Trilogy' linked from our Blu-ray Release Schedule, where it's indexed under December 13. 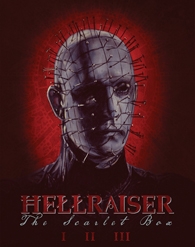