The distributor has revealed its upcoming slate of April releases, including Richard Kelly's 'Donnie Darko.'

In an early announcement to retailers, Arrow Video is preparing 'Caltiki the Immortal Monster,' 'Wolf Guy,' 'Django, Prepare a Coffin,' and 'Donnie Darko' for Blu-ray throughout the month of April.

'Caltiki the Immortal Monster' (April 11) - Arrow Video presents a collaboration between two giants of Italian cult cinema Riccardo Freda (The Vampires, The Horrible Dr Hichcock) and Mario Bava (5 Dolls for an August Moon, Blood and Black Lace)! A team of archaeologists led by Dr John Fielding (John Merivale, Circus of Horrors) descends on the ruins of an ancient Mayan city to investigate the mysterious disappearance of its inhabitants. However, the luckless explorers get more than they bargained for when their investigation of a sacrificial pool awakens the monster that dwells beneath its waters the fearsome and malevolent god Caltiki. Though Riccardo Freda received sole directing credit, a significant portion of the film was in fact the work of Mario Bava, who also served as its cinematographer and was responsible its striking special effects. Drawing on a diverse array of influences, from The Quatermass Experiment to the works of HP Lovecraft, Caltiki the Immortal Monster is a unique and unforgettable sci-fi chiller which showcases these two legendary filmmakers at their most inventive. Presented here for the first time in a newly restored high definition transfer, Caltiki shines and terrifies! like never before.

The Blu-ray will feature 1080p video, lossless Italian and English mono soundtracks, and supplements will include:

- New audio commentary by Tim Lucas, author of Mario Bava: All the Colors of the Dark
- New audio commentary by Troy Howarth, author of The Haunted World of Mario Bava and So Deadly, So Perverse: 50 Years of Italian Giallo Films
- From Quatermass to Caltiki, a new discussion with author and critic Kim Newman on the influence of classic monster movies on Caltiki
- Riccardo Freda, Forgotten Master, an archival interview with critic Stefano Della Casa
- The Genesis of Caltiki, an archival interview with filmmaker Luigi Cozzi
- Archival introduction to the film by Stefano Della Casa
- Alternate opening titles for the US version
- Reversible sleeve featuring original and newly commissioned artwork by Graham Humphreys
- FIRST PRESSING ONLY: Illustrated collector s booklet featuring new writing by Kat Ellinger and Roberto Curti 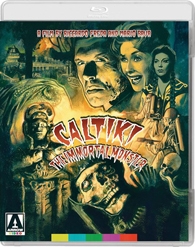 'Django, Prepare a Coffin' (April 11) - Django the drifter returns in this classic sixties Spaghetti Western from Ferdinando Baldi (Texas Addio, Comin At Ya!), starring Terence Hill (They Call Me Trinity) as the wandering gunslinger, hired as executioner to a corrupt local politician who is framing innocent men, sending them to hang in an evil scheme to take hold of their land. But Django has other ideas and, cleverly faking the deaths of the condemned men, he assembles them into a loyal gang who ll help him take down the boss, a man who had a hand in the death of Django s wife years before. Thrill as Django gets his bloody revenge with a hail of bullets in this classic from a series of B-movie western that helped to define a genre. Prepare your coffin now!

The Blu-ray will feature 1080p video, Italian and English uncompressed 2.0 soundtracks, and supplements will include: 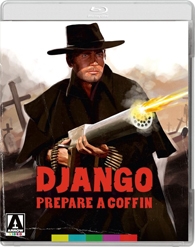 'Donnie Darko' (April 18) - Fifteen years before Stranger Things, Richard Kelly set the template and the high-water mark with his debut feature, Donnie Darko. Initially beset with distribution problems, it would slowly find its audience and emerge as arguably the first cult classic of the new millennium. Donnie is a troubled high school student: in therapy, prone to sleepwalking and in possession of an imaginary friend, a six-foot rabbit named Frank, who tells him the world is going to end in 28 days 06 hours 42 minutes and 12 seconds. During that time he will navigate teenage life, narrowly avoid death in the form of a falling jet engine, follow Frank's maladjusted instructions and try to maintain the space-time continuum. Described by its director as ''The Catcher in the Rye as told by Philip K. Dick'', Donnie Darko combines an eye-catching, eclectic cast pre-stardom Jake and Maggie Gyllenhaal, heartthrob Patrick Swayze, former child star Drew Barrymore, Oscar nominees Mary McDonnell and Katharine Ross, and ER star Noah Wyle and an evocative soundtrack of 80s classics by Echo and the Bunnymen, Tears for Fears and Duran Duran. This brand-new 4K restoration, carried out exclusively for this release by Arrow Films, allows a modern classic to finally receive the home video treatment it deserves.

The Blu-ray will feature 1080p video sourced from brand new 4K restorations of both the Theatrical Cut and the Director's Cut, a DTS-HD MA 5.1 soundtrack, and supplements will include: 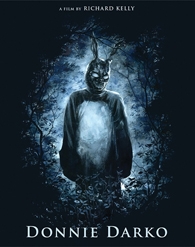 'Wolf Guy' (April 25) - Shinichi ''Sonny'' Chiba is a martial arts ''manimal'' in the ultra-70's, 100% bizarre mixture of horror, action and sci-fi that is Wolf Guy, one of the rarest and most sought-after cult films produced by Japan's Toei Studio. Based on a manga by Kazumasa Hirai (creator of 8 Man), and never before released outside of Japan, it's a genre film classic waiting to be discovered and a completely unclassifiable trip into phantasmagoric funk. Chiba stars as Akira Inugami, the only survivor of a clan of ancient werewolves who relies on his supernatural powers to solve mysterious crimes. After a series of bloody killings perpetrated by an unseen force, Inugami uncovers a conspiracy involving a murdered cabaret singer, corrupt politicians, and a plot by the J-CIA to harvest his blood in order to steal his lycanthropic powers! At the same time, Inugami also discovers the truth behind his family heritage, and that he may not be the last of his kind. Directed by B-movie genius Kazuhiko Yamaguchi (Sister Streetfighter, Wandering Ginza Butterfly, Karate Bear Fighter), Wolf Guy truly is one-of-a-kind, with Chiba in full effect as the part-man, part-wolf, all-karate action hero and a collection of familiar 1970's Toei actors in support. Violence, action, nudity, real surgical footage, and a psychedelic musical score all work together to create an unforgettable trip to the heights of Japanese cinematic weirdness.

The Blu-ray will feature 1080p video, a Japanese uncompressed mono soundtrack, and supplements will include: