Spider Baby - In a dilapidated rural mansion, the last generation of the degenerate, inbred Merrye family lives with the inherited curse of a disease that causes them to mentally regress from the age of 10 or so on as they physically develop. The family chauffeur looks out for them and covers up their indiscretions. Trouble comes when greedy distant relatives and their lawyer arrive to dispossess the family of its home...

The Blu-ray/DVD combo pack will feature 1080p video, a LPCM 2.0 soundtrack, and supplements will include: Audio commentary featuring Jack Hill and star Sid Haig; Panel discussion from The Academy of Motion Picture Arts and Sciences FILM-TO-FILM Festival, recorded September 2012, featuring Jack Hill and stars Quinn K. Redeker and Beverly Washburn; The Hatching of Spider Baby - Interviews with Jack Hill, Sid Haig, star Mary Mitchel, fan Joe Dante and more on the making of the film; Spider Stravinsky: The Cinema Sounds of Ronald Stein - The composer of 'The Terror' and 'Attack of the 50 Foot Woman' among others is remembered by Harlene Stein, Jack Hill, American Cinematheque's Chris D. and others; The Merrye House Revisited - Jack Hill revisits the original house that was used as the main location in the film; Alternate opening title sequence; Extended scene; Original Trailer; Gallery of behind-the-scenes images; The Host (1960) – Jack Hill's early short film featuring Sid Haig in his first starring role [30 mins]; Reversible sleeve featuring original and newly commissioned artwork by Graham Humphreys; Collector's booklet featuring writing on the film by artist and writer Stephen R. Bissette, and an extensive article re-printed from FilmFax: The Magazine of Unusual Film and Television featuring interviews with the cast and crew, illustrated with original stills and artwork. 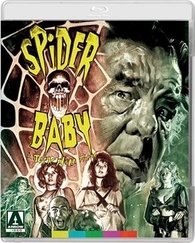 Contamination - A ship pulls into New York Harbor with no one on board. The police find a cargo full of green pulsating eggs. Upon contact, the eggs explode spreading a green acid like substance that seeps into the skin and explodes. It is later discovered that the eggs are being manufactured in South America by a one-eyed Martian that grew from a tiny seed a former astronaut brought back from a expedition to Mars...

The Blu-ray/DVD combo pack will feature 1080p video and supplements will include: 2014 Q&A with Cozzi and star Ian McCulloch, recorded at Abertoir Film Festival; Luigi Cozzi on the Creation of Contamination – an archive documentary hosted by the director and including behind-the-scenes footage; Theatrical Trailer; Reversible sleeve featuring original and newly commissioned artwork by Gary Pullin; and Collector's booklet featuring new writing on the film, illustrated with original archive stills and posters. 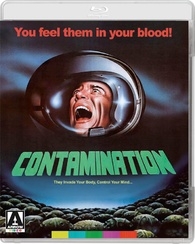 The Happiness of the Katakuris - From Takashi Miike, the prolific director of such shocking hits including 'Audition' and 'Ichi the Killer' comes "The Sound of Music meets Dawn of the Dead"! The Katakuris are a family trying to run a peaceful country inn but with a lack of guests there is much excitement for their first visitor, until they wind up dead! As each guest in turn dies in strange circumstances the family agree to hide the bodies but will the coverups come back to haunt them... In The Happiness of the Katakuris scenes of grotesque stop motion animation, surreal musical numbers and zombies combine to make one of the finest horror-comedies ever made.

The Blu-ray/DVD combo pack will feature 1080p video, a LPCM 2.0 soundtrack, and supplements will include: Audio commentary by director Takashi Miike; The Making of the Katakuris - An original documentary from the film's production featuring interviews and behind-the-scenes footage with the cast and crew; Interviews with the Katakuris cast members Kenji Sawada, Keiko Matsuzaka, Kiyoshiro Imawano, Shinji Takeda, Naomi Nishida, Tetsuro Tanba and Miike; Animating the Katakuris - A look at the creation of the film's stop motion effects with animation director Hideki Kimura and Miike; Trailer and TV Spots; Reversible sleeve featuring original and newly commissioned artwork by the Twins of Evil
Booklet featuring new writing on the film by author Johnny Mains and a re-printed interview with Miike conducted by Sean Axmaker, illustrated with original stills. 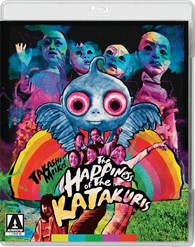 You can find the latest specs for all of the films listed above linked from our Blu-ray Release Schedule, where they're indexed throughout June.

Discs mentioned in this article: (Click for specs and reviews)
Spider Baby (Blu-ray)
Contamination (Blu-ray)
The Happiness of the Katakuris (Blu-ray)