The distributor has revealed its upcoming slate of June releases, including Dario Argento's The Bird with the Crystal Plumage.

In an early announcement to retailers, Arrow Video is preparing Madhouse, The Bird with the Crystal Plumage, and Doberman Cop for Blu-ray throughout the month of June.

Madhouse (June 13) - MANY PEOPLE VISIT ... NO ONE EVER LEAVES.Helmed by legendary producer/director Ovidio Assonitis, the man behind such cult favourites as The Visitor and Piranha II: The Spawning, Madhouse is a crimson-soaked tale of sibling rivalry taken to a terrifying and bloody extreme.

Julia has spent her entire adult life trying to forget the torment she suffered at the hands of her twisted twin Mary... but Mary hasn t forgotten. Escaping hospital, where she s recently been admitted with a horrific, disfiguring illness, Julia's sadistic sister vows to exact a particularly cruel revenge on her sibling this year promising a birthday surprise that she ll never forget.

An Italian production shot entirely in Savannah, Georgia, Madhouse (aka And When She Was Bad and There Was a Little Girl) fuses slasher elements with the over-the-top excess of 80s Italian terror resulting in a cinematic bloodbath so gut-wrenching that the British authorities saw fit to outlaw it as a video nasty .

The Blu-ray will feature 1080p video, an English PCM 2.0 soundtrack, and supplements will include: 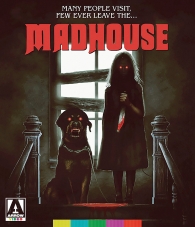 Sam Dalmas (Tony Musante, We Own the Night), an American writer living in Rome, inadvertently witnesses a brutal attack on a woman (Eva Renzi, Funeral in Berlin) in a modern art gallery. Powerless to help, he grows increasingly obsessed with the incident. Convinced that something he saw that night holds the key to identifying the maniac terrorising Rome, he launches his own investigation parallel to that of the police, heedless of the danger to both himself and his girlfriend Giulia (Suzy Kendall, Spasmo)…

A staggeringly assured debut, The Bird with the Crystal Plumage establishes the key traits that would define Argento's filmography, including lavish visuals and a flare for wildly inventive, brutal scenes of violence. With sumptuous cinematography by Vittorio Storaro (Apocalypse Now) and a seductive score by legendary composer Ennio Morricone (Once Upon a Time in the West), this landmark film has never looked or sounded better in this new, 4K-restored limited edition from Arrow Video!

The Blu-ray will feature 1080p video, Italian and English lossless soundtracks, and supplements will include:

Suggested list price for the Blu-ray has not been announced yet.

Doberman Cop (June 27) - Released just as the popularity of yakuza movies was waning in Japan, and as the country's film industry was undergoing some fundamental shifts, Doberman Cop is a unique entry in the career of director Kinji Fukasaku (Battles Without Honor and Humanity, Cops vs Thugs), and reunited him with star Shinichi "Sonny" Chiba (The Street Fighter, Wolf Guy) in an American-style crime movie that mixes gunplay and pulp fiction with martial arts and lowbrow comedy to create one of their most entertaining films.

Based on a popular manga by "Buronson" (creator of Fist of the North Star), Doberman Cop follows the fish-out-of-water adventures of Joji Kano (Chiba), a tough-as-nails police officer from Okinawa who arrives in Tokyo's Kabuki-cho nightlife district to investigate the savage murder and mutilation of an island girl who had been working as a prostitute. Initially dismissed as a country bumpkin (complete with straw hat and live pig in tow!), Kano soon proves himself a more savvy detective than the local cops, and a tougher customer than anyone expected. As he probes deeper into the sleazy world of flesh-peddling, talent agency corruption and mob influence, Kano uncovers the shocking truth about the girl, her connection to a yakuza-turned-music manager (Hiroki Matsukata), and a savage serial killer who is burning women alive.

Made to appeal both to the youth market with its biker gangs and popular music, as well as to old-time yakuza movie fans, Doberman Cop is an surprising oddity in Fukasaku's career, his sole film adapted directly from a manga and never before released on video outside of Japan. Featuring Chiba at his charismatic best — channeling a Japanese Dirty Harry while doing all his own stunts — and Fukasaku at his most fun, deftly showcasing the combined talents of his "Piranha Army" stock company of actors and other regular players — Doberman Cop is a classic action comedy and a missing link in 1970's Japanese cinema deserving of rediscovery.

The Blu-ray will feature 1080p video, a Japanese mono soundtrack, and supplements will include:

Suggested list price for the Blu-ray has not been announced yet.