The distributor has revealed its upcoming slate of August releases.

In an early announcement to retailers, Arrow Video is preparing 'Microwave Massacre,' 'Battles Without Honor and Humanity,' 'Hiroshima Death Match,' 'Proxy War,' 'Police Tactics,' 'Final Episode' and 'The Bloodstained Butterfly' for Blu-ray throughout the month of August.

'Battles Without Honor and Humanity' (August 9) - When Battles Without Honor and Humanity first hit Japanese screens in January 1973, partially inspired by the success of The Godfather, it blasted out a new Ground Zero for crime cinema not only in Japan, but in the rest of the world, and spawned a legendary series that would lead to additional episodes, spin-offs, and countless imitations. 1947. Ex-soldier Shozo Hirono (Bunta Sugawara), after proving his ability with a gun, emerges from the teeming black markets of postwar Kure City into the professional world of the yakuza. Shozo makes his way from prison to boss in the newly-formed Yamamori family via gang feuds, assassinations and the shifting allegiances of his fellow mobsters, despite his own growing disillusionment with the men he is supposed to respect. Based on the true account of a Hiroshima mob boss and supplemented by meticulous research by screenwriter Kazuo Kasahara, this ferocious, violent saga was directed in a dynamic, newsreel-like style by Kinji Fukasaku, and stunned cinemagoers in Japan upon its release. Like a head-spinning mixture of Martin Scorsese and Paul Greengrass, the film s frenetic cinematography, colourful characters, and iconic score by Toshiaki Tsushima will leave you thrilled and exhausted, as you embark on one of the world s greatest gangster film series.

The Blu-ray will feature 1080p video, an uncompressed Japanese mono soundtrack, and supplements will include: Brand new audio commentary by critic and author Stuart Galbraith IV; Yakuza Graveyard a new interview with Takashi Miike about Kinji Fukasaku and the yakuza film genre; Original trailers for all five films; and Reversible sleeve featuring original and newly commissioned artwork by Reinhard Kleist. 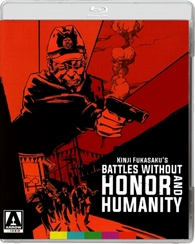 'Hiroshima Death Match' (August 9) - The celebrated Battles Without Honor and Humanity series continues with its second episode, Hiroshima Death Match, setting aside part one protagonist Shozo Hirono (Bunta Sugawara) to follow a side story showcasing genre icons Sonny Chiba (The Street Fighter) and Meiko Kaji (Female Prisoner 701: Scorpion). Hiroshima, 1950. Demobilized kamikaze pilot Shoji Yamanaka (Kinya Kitaoji) is released from prison and finds himself hungry and broke. Following a bust up with a local gang, he earns the psychotic wrath of local underboss Otomo (Chiba), but Yamanaka s suicidal impulses are soon put to good use as a hitman for another gang, befriending series hero Shozo Hirono in the process. Despite a budding but forbidden romance with the boss s niece (Kaji), Yamanaka s instability and recklessness soon begin to make him a dangerous liability. Taking an even more fatalistic turn than the series original entry, Hiroshima Death Match tells the story of the ultimate loser, based on a true story uncovered by screenwriter Kazuo Kasahara while interviewing real-life Hiroshima yakuza for part one. A prosperous era may be dawning for the protagonists, but one with new characters and new grudges to draw them more deeply into its world of blood and betrayal. 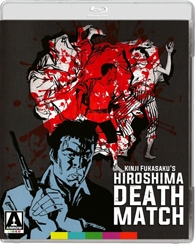 'Proxy War' (August 9) - Moving beyond the true stories dramatized in the first two episodes of the Battles Without Honor and Humanity series, director Kinji Fukasaku and screenwriter Kazuo Kasahara embark on their most complex narrative yet in Proxy War, a multi-character web of alliances and betrayals set against the economic growth of Japan as it prepares to host the 1964 Olympic games. 1960. A power vacuum is formed within the Muraoka family when underboss Uchimoto (Takeshi Kato) refuses to avenge the assassination of a superior. With the help of series hero Shozo Hirono (Bunta Sugawara), Uchimoto pledges loyalty to the powerful Akashi gang, but is soon expelled from the Muraoka for the act. Meanwhile, Akashi rivals the Shinwa Group form their own pact with Muraoka, and the enmity between the two gangs threatens to erupt into bloody violence across all of western Japan. The labyrinthine plotline of Proxy War which continues in episode four, Police Tactics approaches pure Jacobean drama as power players, kingmakers, and petty soldiers clash weapons and words in a stylized ritual of alliances and betrayals. Considered by many critics to be the best episode of the series, Proxy War is complex crime drama of the highest order.

The Blu-ray will feature 1080p video, an uncompressed Japanese mono soundtrack, and supplements will include: Secrets of the Piranha Army a new documentary about the troupe of supporting actors who appeared throughout the series, featuring interviews with original Piranha members Masaru Shiga and Takashi Noguchi, plus second-generation Piranha, Takashi Nishina and Akira Murota; Tales of a Bit Player a new interview with supporting actor and stuntman Seizo Fukumoto; Original trailer; Reversible sleeve featuring original and newly commissioned artwork by Reinhard Kleist. 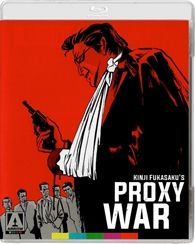 'Police Tactics' (August 9) - Continuing the storyline begun in episode three of the Battles Without Honor and Humanity series, Police Tactics sees director Kinji Fukasaku and screenwriter Kazuo Kasahara further depicting the life-and-death struggle of the gangsters of Hiroshima and Kure, even as the rest of Japan is beginning to tire of their old-fashioned codes. 1963. Shozo Hirono (Bunta Sugawara), expelled from the Yamamori gang, has allied himself with the cowardly Uchimoto (Takeshi Kato) and the Akashi family, who are engaged in a power struggle with the Shinwa Group, allied with the Yamamori. But mainstream society, enjoying unprecedented economic prosperity, will no longer tolerate their violent criminal activities. The police begin a major crackdown, putting the gangs on the defensive. But rogue soldiers on both sides still refuse to keep the peace, earning the wrath of both their bosses and the forces of law and order. The last film of the series written by Kasahara, Police Tactics was intended to be the final episode, until its phenomenal success led to one additional entry. A fîn de siècle mood permeates throughout, with characters fully aware of their impending obsolescence, yet striving for a return to the less prosperous, but simpler post-war glory days. 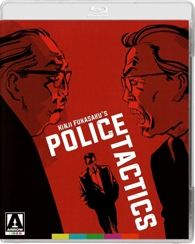 'Final Episode' (August 9) - The Final Episode of the Battles Without Honor and Humanity series brought a new, more contemporary mood to the film and its characters. The yakuza may be starting to resemble a legitimate business, but director Kinji Fukasaku, working with new screenwriter Koji Takada, never lets the audience forget their violent origins, and their tried-and-true methods of accomplishing their business. 1966. After a police crackdown, the gangs of Hiroshima and Kure have formed a massive, multi-family political and economic coalition called the Tensei Group, seeking a way forward into the 1970 s as part of Japan s economic bubble. Shozo Hirono (Bunta Sugawara) finds himself increasingly alienated from this semi-legitimate form of corruption, particularly as acting Tensei Group chairman Matsumura (Kinya Kitaoji) tries to put the gangs on a new, more business-like path. But old habits die hard, and when rivalries surface once again, they bring with them the promise of more bloodshed. The long-awaited conclusion to the epic series is an elegy for the bad guy, with the harsh realization that Japan s economic growth came about only through the sacrifice of the blood of its young men, victims of twenty long years of Battles Without Honor and Humanity. 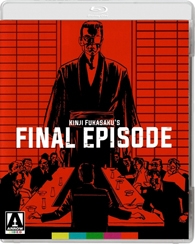 'Microwave Massacre' (August 16) - THEY CAME FOR DINNER...TO FIND THEY WERE IT!! Microwave Massacre stars legendary stand-up comedian and actor Jackie Vernon (the voice of Frosty The Snowman from the beloved animated Rankin / Bass classic animated holiday special) as Donald, a disgruntled construction worker whose wife s predilection for haute cuisine drives him to cannibalism. Donald unwittingly stumbles upon a solution to his two major problems in his life his nagging wife and his lack of tasty meals when, one night, he bludgeons his better half to death with a pepper grinder in a drunken rage. Thinking on his feet, Donald dismembers the body and sets about microwaving the remains, which turn out to be rather delicious. Trouble is, now he s got a taste for human flesh that needs satisfying... Eschewing all notions of good taste, Wayne Berwick s Microwave Massacre is a deliciously depraved exercise in political incorrectness that has gone on to gain a cult following thanks to a characteristically deadpan performance from lead Vernon, who delivers such choice lines as I m so hungry I could eat a whore . Vegetarians need not apply! 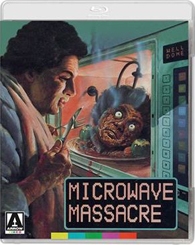 'The Bloodstained Butterfly' (August 23) - Directed by Duccio Tessari (Death Occurred Last Night, A Pistol for Ringo), The Bloodstained Butterfly melds the lurid giallo traditions popularized by Dario Argento and Mario Bava with courtroom drama, resulting in a film that is as concerned with forensic detail and legal process as it is with grisly murders and audacious set-pieces. When a young female student is savagely killed in a park during a thunderstorm, the culprit seems obvious: her lover, TV sports personality Alessandro Marchi (Giancarlo Sbragia, Death Rage), seen fleeing the scene of the crime by numerous eyewitnesses. The evidence against him is damning... but is it all too convenient? And when the killer strikes again while Marchi is in custody, it quickly becomes apparent that there s more to the case than meets the eye... Starring 70s heartthrob Helmut Berger (Dorian Gray, The Godfather: Part III) alongside genre mainstays Evelyn Stewart (The Psychic, The Case of the Scorpion s Tail) and Carole André (Colt 38 Special Squad), and featuring a score by Gianni Ferrio (Death Walks at Midnight), The Bloodstained Butterfly is presented uncut and in a sumptuous new 4K restoration that allows this unique and haunting thriller to shine like never before! 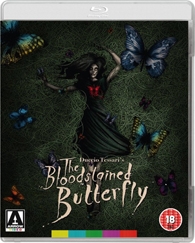