Pricing and availability for Apple's new streaming platform have finally been revealed.

Apple has officially announced a launch date and subscription price for Apple TV+. The new ad-free digital video service will be available November 1 for a monthly subscription price of $4.99. In addition, customers who purchase an iPhone, iPad, Apple TV, iPod touch or Mac can also now receive one year of Apple TV+ for free.

"With Apple TV+, we are presenting all-original stories from the best, brightest and most creative minds, and we know viewers will find their new favorite show or movie on our service," said Zack Van Amburg, Apple’s head of Worldwide Video. "Each Apple TV+ original offers its own unique story, fresh perspective and powerful message — all meant to entertain, connect and inspire cultural conversations."

Apple TV+ content will be available through the company's existing Apple TV app, offering access to exclusive movies, shows, and documentaries from an impressive roster of filmmakers, writers, and performers. Exclusive shows and movies will be added regularly starting November 1, and all content will be available to stream online or to download for offline playback via the Apple TV app. 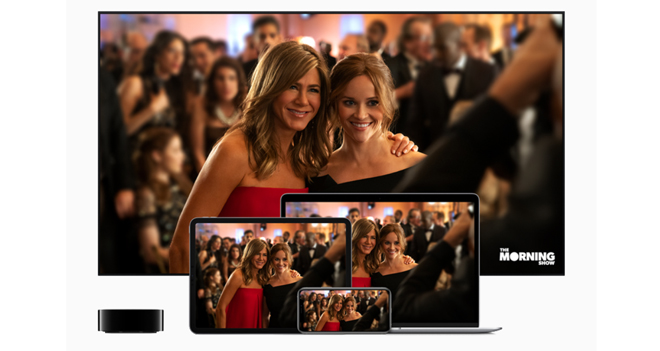 Here's a rundown of some of the launch titles set to premiere exclusively through Apple TV+ on November 1 per Apple:

The Apple TV app is currently available on Apple TV 4K as well as iPhone and iPad devices, and select Samsung TVs. In addition, customers can use AirPlay2 to stream content from the app on iOS mobile devices to select Samsung, VIZIO, and LG TVs. Likewise, access is also set to expand to smart TVs from Sony, along with Roku and FireTV devices in the future.