The Academy Award nominee for Best Foreign Language Film and the winner of the American Society of Cinematographers Spotlight Award is planned for Blu-ray in January.

In an early announcement to retailers, Altered Innocence is preparing 'Concrete Night' for Blu-ray on January 17.

A stunning, dream-like odyssey through a beautiful and otherworldly Helsinki over the course of one evening, CONCRETE NIGHT follows the impressionable 14-year-old Simo as he keeps his soon-to-be incarcerated brother company. The official Finnish submission to the Academy Awards® for Best Foreign Language Film captures the pain and joy of youth through exquisite, eye-popping black-and-white cinematography.

The release will feature 1080p video, lossless 5.1 audio, and supplements have yet to be revealed.

You can find the latest specs for 'Concrete Night' linked from our Blu-ray Release Schedule, where it is indexed under January 17. 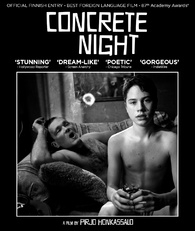