The animated family flick will arrive on Blu-ray in June, and pre-orders are now live.

In an early announcement to retailers, Alchemy is preparing 'Back to the Jurassic' for Blu-ray on June 9.

Ernie, his little sister Julia, and his best friend Max accidentally start a time-machine while playing in Max's inventor father's workshop and find themselves transported back in time 65 million years, where they are adopted by doting dinosaur mom Tyra (Melanie Griffith) and a rambunctious dinosaur named Dodger (Rob Schneider). If they ever wish to make it back home they must steer clear of their evil dinosaur rivals (William Baldwin and Stephen Baldwin) and rely on the help of their mother Tyra and Dodger after all, family isn't always just the one you re born into!

You can find the latest specs for 'Back to the Jurassic' linked from our Blu-ray Release Schedule, where it's indexed under June 9. 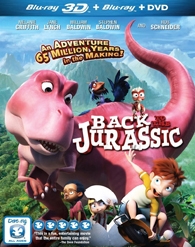 Discs mentioned in this article: (Click for specs and reviews)
Back to the Jurassic - 3D (Blu-ray)