The film starring Nicolas Cage is headed for Blu-ray next month.

In an early announcement to retailers, Alchemy is set to release 'The Runner' on Blu-ray on August 25.

In the aftermath of the 2010 BP oil spill, an idealistic but flawed politician is forced to confront his dysfunctional life after his career is destroyed in a sex scandal.

You can find the latest specs for 'The Runner' linked from our Blu-ray Release Schedule, where it's indexed under August 25. 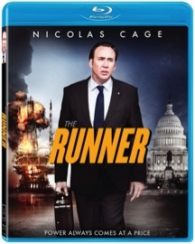