The thriller starring Nicole Kidman, Joseph Fiennes, and Hugo Weaving is headed for Blu-ray in August.

In an early announcement to retailers, Alchemy will be releasing 'Strangerland' on Blu-ray on August 18.

Newly arrived to a remote desert town, Catherine (Nicole Kidman) and Matthew (Joseph Fiennes) are tormented by suspicion when their two teenage children mysteriously vanish into a dust storm.

You can find the latest specs for 'Strangerland' linked from our Blu-ray Release Schedule, where it is indexed under August 18. 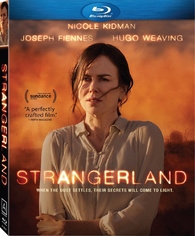