In an early announcement to retailers, Alchemy says 'Survivor' for Blu-ray on July 7.

A Foreign Service Officer (Milla Jovovich) newly posted to the American embassy in London is charged with stopping terrorists from getting into the US. After surviving a vicious attack on the embassy, she finds herself framed for crimes she didn't commit and racing to elude assassins while trying to clear her name and stop a large-scale terrorist attack set for New Year's Eve.

You can find the latest specs for 'Survivor' linked from our Blu-ray Release Schedule, where it is indexed under July 7. 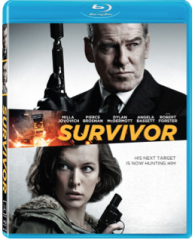