The vampire thriller will flash its fangs on Blu-ray in October. Pre-orders are now live.

In an early announcement to retailers, Alchemy is preparing 'Nocturna (2015)' for Blu-ray on October 6.

It's Christmastime in New Orleans and children are mysteriously disappearing, stolen from their homes, taken off the street, dozens have vanished without trace. Detective Harry Ganat and his partner Roy Cody have found a young girl in the home of a murdered swamper and she leads them to the den of her captors...the Molderos, a group of merciless vampires who feed on the blood of children. The detectives lives are spared by a troika of ancient vampires; Brisbane, Dimitri and Lydia are all seductive creatures who despise the Molderos as well. In exchange for protecting the detectives from their new enemies, the trio of 'friendly' vampires offer them a deal to find the hidden lair of their mutual enemies and their lives will be spared and the other stolen children will be returned to them unharmed. But finding and killing the Molderos is not going to be easy, Harry soon finds himself questioned by the police, hunted by the Molderos at night and caught in a deadly love triangle between Lydia and her ancient master, Brisbane.

You can find the latest specs for 'Nocturna' linked from our Blu-ray Release Schedule, where it's indexed under October 6. 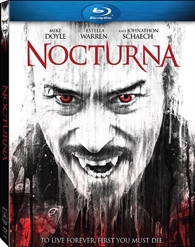 Discs mentioned in this article: (Click for specs and reviews)
Nocturna (2015) (Blu-ray)