'Hangman' Heading to Blu-ray in February

In an early announcement to retailers, Alchemy says 'Hangman' will arrive on Blu-ray on February 9.

Returning from vacation, the Miller family find their home has been broken into. After cleaning up the mess they continue with their lives, shaking off the feeling of being violated. Little do they know the real nightmare has just begun.

You can find the latest specs for 'Hangman' linked from our Blu-ray Release Schedule, where it's indexed under February 9. 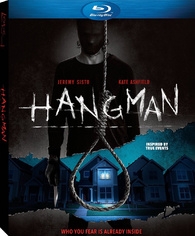