The inspirational drama will arrive on Blu-ray in August.

In an early announcement to retailers, Alchemy is preparing 'Brother's Keeper' for Blu-ray on August 4.

Identical twins Andy and Pete Goodwynn (Alex and Graham Miller) have always been there for each other. With high school graduation near, Pete plans to marry the love of his life and head off to seminary to become a preacher. Andy, a rebel at heart, has no plans and seemingly no future. But in a cruel twist of fate orchestrated by the town's most powerful family their lives are forever altered. Pete is framed for murder, leaving Andy struggling to find a way to save his brother. Can the brothers gain vengeance on those who have taken everything from them? While revenge may seem sweet, Brother's Keeper is a powerful reminder that only forgiveness can truly heal.

You can find the latest specs for 'Brother's Keeper' linked from our Blu-ray Release Schedule, where it is indexed under August 4. 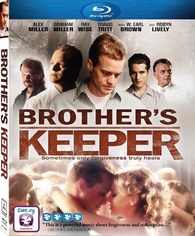