Fans can celebrate the San Francisco Giants' championship win on Blu-ray later this month, and pre-orders are now live.

In an early announcement to retailers, A&E Home Video is preparing '2014 World Series Film' for Blu-ray on November 25. A separate 'Collector's Edition' will also be available on December 2.

'2014 World Series Film' - The Official 2014 World Series Film follows the Giants as they win every series in the 2014 Postseason, besting every team from perennial contenders to squads with some of the game's best young superstars. They became the first team ever to win four rounds of Postseason play. And now they stand alone as World Series champions for the third time in five seasons. General Manager Brian Sabean filled a clubhouse with players whose character exceeded their amazing talent. But talented they were, riding "Mad Bum" to the championship while Pablo Sandoval and Hunter Pence hit everything in sight. As a result of the big moments from Manager Bruce Bochy's cast of Travis Ishikawa, Michael Morse, Ryan Vogelsong, Brandon Belt, Brandon Crawford and Joe Panik, the San Francisco Giants are the 2014 World Series Champions.

Specs have not been detailed yet, but supplements will include: Behind-the-Scenes Interviews and Footage. 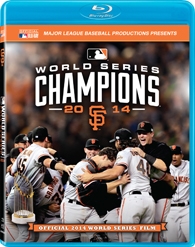 Specs have not been detailed yet, but supplements will include: The Complete NLCS Game 5; Four Audio Channel Options: TV, home radio, away radio and Spanish-language broadcast; and SLEEVESTATS™ Insert with game trivia, official stats and more. 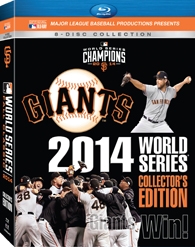