The seventh season of the documentary series is heading to Blu-ray in March, and you can pre-order the show here.

In an early announcement to retailers, A&E Home Entertainment is preparing 'Ancient Aliens: Season 7, Volume 1' for Blu-ray on March 10.

Explore the intriguing possibility that ancient aliens shaped our distant past in 'Ancient Aliens Season 7.' From the beginning of recorded history, humans have told stories about beings with super-human strength. Could tales about Zeus, Thor and Hanuman and even today’s Superman and Batman really have originated in oral legends about extraterrestrials? And in ancient myths from around the globe, gods are often found intervening in human affairs, from Sumerian myth to the story of Moses. Were these supernatural visitations really the work of aliens using advanced technology to shape our civilization? We’ll also consider whether the reptilian alien, a fixture of science fiction, is reflected in the serpent gods of ancient myth. Could they have been living beings? Find out, and much more.

You can find the latest specs for 'Ancient Aliens: Season 7, Volume 1' linked from our Blu-ray Release Schedule, where it's indexed under March 10. 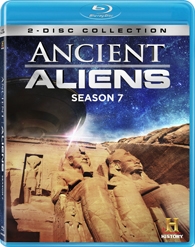