The winner of the Silver Bear for Outstanding Artistic Contribution for Cinematography at the 2015 Berlin International Film Festival will make its Blu-ray debut in March.

In an early announcement to retailers, Adopt Films and Kino Lorber will be releasing 'Victoria' on Blu-ray on March 8.

Laia Costa and Frederick Lau star in breakout performances, winning awards for Best Performance by a Leading Actress and Actor, respectively, at the German Film Awards. This groundbreaking and technically daring indie hit and festival success -- ambitiously shot in a single take -- tells the story of a young woman, alone in Berlin, who meets a group of local men at a nightclub, and finds herself involved in a pulse-pounding, exciting thrill-ride that quickly spirals dangerously out of control.

Hailed by critics for its bold and audacious stylistic approach, Victoria is the fourth film by acclaimed German director Sebastian Schipper, whose previous films include Sometime in August and A Friend of Mine. In addition to the Silver Bear, Victoria won the Prize of the Guild of German Art House Cinemas, and Reader Jury of the "Berliner Morgenpost" Awards at the 2015 Berlin Film Festival, six awards including Outstanding Feature Film and Best Direction at the German Film Awards, and Festival Award for Best International Film at the San Diego Film Festival, among numerous other awards and nominations at international film festivals.

This film is not a movie; it's not about a bank robbery. It is a bank robbery. "Victoria" was shot in one single take. Two hours and eighteen minutes. No cuts. No CGI. No cheap tricks. No expensive ones, either. Just one shot. Victoria, a young woman from Madrid, meets for local Berliners outside a nightclub. Sonne and his friends promise to show her a good time and the real side of the city. But these lads have gotten themselves into hot water: they owe someone a dangerous favor that requires repaying that evening. As Victoria's flirtation with Sonne deepens into something more, he convinces her to come along for the ride. And later, when things become more ominous and possibly lethally dangerous for Sonne, she insists on coming along. As the night takes on an ever more menacing character, what started out as a good time quickly spirals out of control. As dawn approaches, Victoria and Sonne address the inevitable; it's all or nothing and they abandon themselves to a heart-stopping race into the depths of hell.

You can find the latest specs for 'Victoria' linked from our Blu-ray Release Schedule, where it is indexed under March 8. 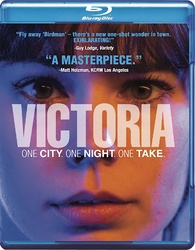