The stunning clip offers a taste of 8K video potential.

While consumer 8K displays are still forthcoming here in the US, YouTube has actually been offering 8K streaming support on its platform since 2015. And a new video uploaded to the Jacob + Katie Schwarz channel just might be one of the most impressive demos for the format so far.

The short film focuses on several breathtaking locations in Morocco and has been uploaded as an 8K FUHD HDR 60fps video using Google's VP9 codec. With that said, the only way to currently watch the clip in full 8K glory is via a computer web browser. But since the content was captured using a Red Monstro Vista Vision 8K Sensor and mastered in 8K, even YouTube's down-rezed 4K feed should still offer a tantalizing taste of 8K video production's potential benefits.

With that in mind, despite not having a true 8K display handy, we decided to check the clip out on one of the next best things -- Samsung's 2018 flagship 65-inch Q9 QLED 4K HDR TV. You can also watch the video for yourself below (or through the YouTube app on your smart TV).

The short film features smooth 60fps gliding camera shots that slowly move through various Moroccan locals, including the streets and markets of Marrakech, the blue city of Chefchaouen, the Arfoud desert, and the ancient city of Ouarzazate. When streaming in 4K HDR on the Q9, the down-rezed 8K footage renders breathtaking detail, offering stunning views of wildlife, rocky shores, impressive architecture, and sand dunes. Textures on walls and objects, and patterns on structures and fabric, are especially striking, allowing one to make out every brick or slab of stone in buildings, and every individual leaf on trees or strand of grass on the ground. Fine detail is especially notable in one sequence shot inside a room full of golden lanterns, highlighting every intricate nook and cranny creating a spacious sense of dimension and separation between each object.

The HDR grading also results in sumptuous primaries and impressive specular highlights on the Q9. Shots of the sun resting just over the horizon in the desert carry concentrated intensity while maintaining detail. Likewise, drifting shots that move through shadowy rooms toward light creeping in from the outside world feature strong contrast and a smooth transition between deep blacks and bright light. Warm tones are rich and realistic, and the pastel blue walls of Chefchaouen are gorgeously realized. 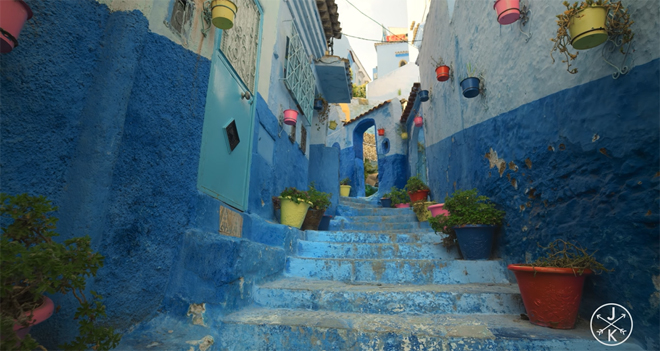 Of course, being a YouTube stream, the clip is still subject to some occasional signs of compression, including some fleeting noise and banding here and there. Likewise, the video actually had to pause once on my setup in order to buffer. But even with these limitations, the clip serves as perfect demo material for current-gen 4K HDR TVs.

With that said, as jaw-dropping as the footage is, I'm not sure the down-rezed 4K stream really offers that much of an edge over similar clips shot and mastered in 4K on YouTube or other streaming services. Don't get me wrong, it's among the more impressive streaming videos I've seen when it comes to overall detail, but I'm not totally sold on the benefits of 8K just yet. The higher-res video capture definitely offers a lot of added freedom for filmmakers to play around with footage during editing and grading on the post-production side, but it remains to be seen if the end product actually offers an appreciable increase in observable detail over a 4K master. And to determine that, we'll really have to wait for higher bitrate 8K content and true 8K TVs.

For now, however, watching the material on a flagship 4K TV offers a promising (albeit far from revelatory) look at what 8K video capture has to offer. And beyond this beautiful trip to Morocco, the Jacob + Katie Schwarz channel also offers a growing collection of additional 8K HDR, 4K HDR, and slow-motion clips that are well worth a look for users who want some impressive demo material to help show off their new Ultra HD TVs.