"For entertainment fanatics who love movies, TV and gaming, nothing beats using an AV receiver to build a true surround sound system," said Robert Goedken, general manager, AV division, Yamaha Corporation of America. "By adding a wireless surround capability to our new line, we’ve made it easier than ever to create an amazing, theater-like experience at home. MusicCast Surround suddenly makes an AV receiver an attractive option for a whole new audience of entertainment fans."

When using the MusicCast Surround feature, a direct Wi-Fi connection is made between an RX-V 85 series AV receiver and the MusicCast 20 or MusicCast 50 wireless speakers, allowing the surround sound audio to stream without having to pass through a user's home router. In addition, all of the new MusicCast Surround products include Wi-Fi, Bluetooth, Apple AirPlay, and Spotify Connect, along with access to Pandora, SiriusXM Internet Radio, TIDAL, Deezer, Napster and thousands of free internet radio stations via the free MusicCast app. Likewise, voice control through Amazon Alexa-equipped devices is provided as well with the free MusicCast skill. 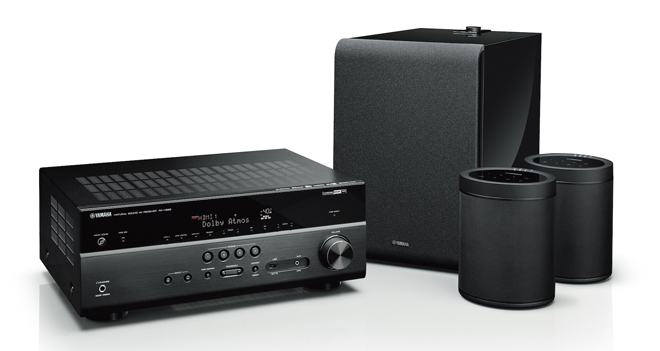 Meanwhile, the MusicCast 20 and MusicCast 50 wireless speakers both offer playback support as standalone audio systems, multi-room systems with existing MusicCast components, or wireless surround speakers with a connected MusicCast Surround-enabled AV receiver. Likewise, two MusicCast 20 speakers can be paired together to enable a stereo mode. And though a single MusicCast 50 is capable of stereo two channel sound on its own, two units can also be paired for an even higher output and wider sound field.

Finally, the MusicCast SUB 100 is designed to serve as a wireless subwoofer option for the new RX-V 85 series receivers. Likewise, the device can also be paired with one or two MusicCast 20 or MusicCast 50 speakers to create a 1.1-channel or 2.1-channel system.

Here's a rundown of pricing and availability for the new lineup: