The sci-fi thriller is coming to Blu-ray in June. Pre-orders are now live.

In an early announcement to retailers, XLrator Media is preparing 'Time Lapse' for Blu-ray on June 16.

'Time Lapse' explores the possibilities of time travel through a machine that is capable of taking pictures 24 hours into the future. When three friends discover this mysterious machine in their neighbor's apartment, they encounter a number of pressing questions, not least of which is the whereabouts of their neighbor. Realizing the potential impact of the machine, Finn (Matt O'Leary), Jasper (George Finn), and Callie (Danielle Panabaker) attempt to cash in on their discovery. But, when a dangerous criminal learns their secret, the friends must set aside their differences and confront the paradox of a future that was once predetermined and entirely uncertain.

Supplements have not been detailed yet, but The Blu-ray will feature 1080p video and a DTS HD-MA 5.1 track.

You can find the latest specs for 'Time Lapse' linked from our Blu-ray Release Schedule, where it is indexed under June 16. 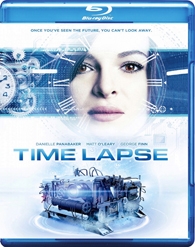 Discs mentioned in this article: (Click for specs and reviews)
Time Lapse (Blu-ray)