The film starring Ron Perlman, Giancarlo Esposito, and Beau Mirchoff will deal Blu-ray in this February.

In an early announcement to retailers, Xlrator Media is working on 'Poker Night' for Blu-ray on February 10.

When you become a detective in Warsaw, Indiana, you go to Poker Night, where you play against some of the best cops in the business, who tell you stories about their time on the job. After new Detective Stan Jeter (Beau Mirchoff) leaves the game, he is caught by a vicious psychopath and locked in a basement, where he must match wits against his captor.

You can find the latest specs for 'Poker Night' linked from our Blu-ray Release Schedule, where it is indexed under February 10. 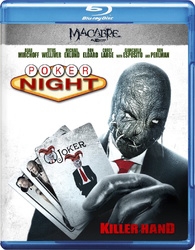