The mystery-thriller may not remember Blu-ray in October.

In an early announcement to retailers, XLrator Media says 'Amnesiac' will arrive on Blu-ray on October 6.

'Amnesiac' tells the story of a man (Wes Bentley) who wakes up in bed suffering from memory loss after being in an accident, only to begin to suspect that his wife (Kate Bosworth) may not be his real wife and that a web of lies and deceit deepen inside the house where he soon finds himself a prisoner.

You can find the latest specs for 'Amnesiac' linked from our Blu-ray Release Schedule, where it is indexed under October 6. 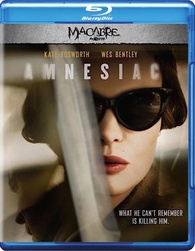