Jimi Hendrix Biopic 'Jimi: All Is by My Side' Starring Andre Benjamin Blu-ray Bound

The legendary musician's life takes center stage in this biopic heading to Blu-ray in January. Pre-orders are now live.

In an early announcement to retailers, Xlrator is preparing 'Jimi: All Is by My Side' for Blu-ray on January 13.

OutKast's André Benjamin stars as Jimi Hendrix in this revealing biopic from writer-director John Ridley ('12 Years A Slave'). Covering a transformative year in Hendrix's life from 1966-67, in which he went from a New York City backing musician to making his mark in London s music scene up until his Monterey Pop triumph, the film presents an intimate portrait of the sensitive young musician on the verge of becoming a rock legend.

You can find the latest specs for 'Jimi: All Is by My Side' linked from our Blu-ray Release Schedule, where it's indexed under January 13. 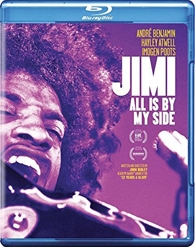 Discs mentioned in this article: (Click for specs and reviews)
Jimi: All Is by My Side (Blu-ray)