The action thriller is gearing up for Blu-ray in January.

In an early announcement to retailers, Xlrator is preparing 'Close Range' for Blu-ray on January 5.

After rescuing his kidnapped niece from a powerful drug cartel, Colton MacReady (Scott Adkins) begins a relentless fight to save his family. The cartel has descended upon his secluded ranch with a thirst for revenge. In tow are a corrupt local sheriff and his crew of deputies, ensuring that help won't be coming any time soon. What ensues is a non-stop assault on the ranch, a blow-by-blow survival marathon for Colton to protect his loved ones and save his life.

You can find the latest specs for 'Close Range' linked from our Blu-ray Release Schedule, where it's indexed under January 5. 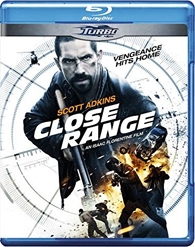 Discs mentioned in this article: (Click for specs and reviews)
Close Range (Blu-ray)