Angus Sampson and Tony Mahony's 'The Mule' Bound for Blu-ray

The thriller stars Hugo Weaving, Leigh Whannell, and Angus Sampson and arrives on Blu-ray in January.

In an early announcement to retailers, Xlrator is preparing to release  'The Mule' on Blu-ray on January 20.

It's 1983. A naive man with lethal narcotics hidden in his stomach is detained by Australian Federal Police. Alone and afraid, ‘the Mule’ makes a desperate choice; to defy his bodily functions and withhold the evidence...literally. And by doing so becomes a “human time-bomb,” dragging cops, criminals, lawyers and his mother into his impossible escapade. Inspired by true events.

You can find the latest specs for 'The Mule' linked from our Blu-ray Release Schedule, where it is indexed under January 20. 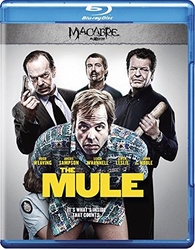