The apocalyptic thriller starring Sarah Snook, Jessica De Gouw, and Nathan Phillips is planned for Blu-ray in May.

In an early announcement to retailers, Sony will be releasing 'These Final Hours' on Blu-ray on May 12.

In this apocalyptic drama, James (Nathan Phillips) is a troubled young man on a mission. He's desperate to join his girlfriend Vicky (Kathryn Beck) at the 'party to end all parties' and numb any feelings as the world comes to an end. On his journey however, James is greeted by a lawless and chaotic city, facing a cataclysmic event that will end life on the planet, and he discovers that getting to where he needs to be will not be easy. Along the way, he saves the life of a girl named Rose (Angourie Rice), frantically searching for her father. Out of options, James invites Rose to join him. Together they discover how they would truly like to spend their last moments on Earth in this world gone mad.

You can find the latest specs for 'These Final Hours' linked from our Blu-ray Release Schedule, where it is indexed under May 12. 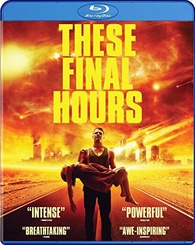