Xu Zheng Gets 'Lost in Hong Kong' on Blu-ray

The Asian comedy sequel will arrive on Blu-ray in March.

In an early announcement to retailers, Well Go USA will be releasing 'Lost in Hong Kong' on Blu-ray on March 1.

Xu Lai had dreams once. To be an artist and marry the girl of his dreams. 15 years later, he's sick of designing bras, humoring his baby-crazy wife, and catering to loopy in-laws. But his upcoming family vacation, now including his DVD-pirating, aspiring-documentarian brother-in-law, has a hidden agenda: a chance meetup with his old flame. But ditching his clan for a clandestine hookup might be the least of his worries. There's been a murder, and his new hot pursuit might be from the cops who want a word with him. Written, directed, produced and starring veteran actor Xu Zheng (LOST IN THAILAND, BREAKUP BUDDIES), LOST IN HONG KONG is the hotly-anticipated sequel to the highest-grossing film in China's history. Also starring Zhao Wei (RED CLIFF, SHAOLIN SOCCER) and Bao Bei er (SNOW GIRL AND THE DARK CRYSTAL, THE FOUR), LOST IN HONG KONG is a raucous comedy of errors that proves truth is stranger than fiction, and while you might not have the life you planned, happy endings might turn up in the places you least expect.

Specs haven't been revealed yet, but supplements include a making of, bloopers, and a trailer.

You can find the latest specs for 'Lost in Hong Kong' linked from our Blu-ray Release Schedule, where it is indexed under March 1. 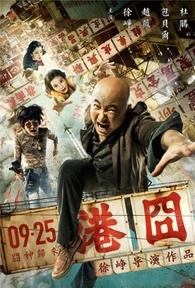