The Asian action comedy is headed for Blu-ray in May.

In an early announcement to retailers, Well Go USA will be releasing 'Mojin: The Lost Legend' on Blu-ray on May 3.

Specs haven't been revealed yet, but supplements will include: a making-of featurette, Behind the Scenes, and a trailer.

You can find the latest specs for 'Mojin: The Lost Legend' linked from our Blu-ray Release Schedule, where it's indexed under May 3. 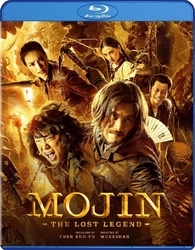