In an early announcement to retailers, Well Go USA is preparing 'The Tiger' for Blu-ray on August 9.

An ex-sharpshooter for the Kingdom of Korea (Choi Min-sik, 'Oldboy') is hunting the country's last tiger. But Japanese forces and vicious local poachers also seek "The Four-Legged Mountain Lord," and will stop at nothing to claim their prey.

Specs have not been detailed yet, but supplements will include the Original Theatrical Trailer.

You can find the latest specs for 'The Tiger' linked from our Blu-ray Release Schedule, where it's indexed under August 9. 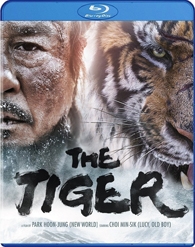 Discs mentioned in this article: (Click for specs and reviews)
The Tiger (Blu-ray)